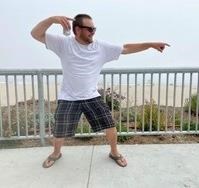 BORN
1985
DIED
2021
Matthew Andrada
September 27, 1985 - September 6, 2021
Santa Cruz
Matthew John Applegate Andrada was the kind of person who made lasting friendships, and if you were lucky enough to have him for a friend, there wasn't much he wouldn't do for you. In fact, Matt never really met a stranger, and if you needed his help, he was always ready to give it. In addition to his very generous nature, Matt was always quick with a smile and a joke. He loved spending time with people, and he was an incredibly gregarious and social person.
It is with profound sadness that we announce his passing on September 6, 2021. Born on September 27, 1985 to Katherine Applegate of Capitola and John Andrada of Watsonville, Matt grew up attending schools in Watsonville and Scotts Valley. As an adult, he worked in the building trades where he became quite accomplished in carpentry and plumbing. In his spare time, Matt enjoyed barbequing and cooking, duck hunting, dirt bike riding, camping, and riding his motorcycle. He was an avid follower of the San Francisco Giants, and the San Francisco 49ers as well as a lover of music. He was an unrepentant lover of life and good times.
In addition to his parents, he leaves his sisters, Ashlee Hankins of Canton, GA, Stephanie Andrada and Staci Gray both of Visalia, as well as numerous aunts, uncles, cousins, and nieces and nephews. Their heartbreak and grief is shared with lifelong as well as newer friends who will also deeply miss Matt's presence in their lives, but will always smile when they recall the times they spent and the laughs they shared with him. One of the most important people in Matt's life was Billi Burkhardt whom he loved since her birth as his own. She brought immeasurable love and happiness to his life.
A celebration of life will be held on Sunday, September 12th, at 5pm at Seacliff State Beach near the cement ship. (All are welcome to attend, and as a tribute to Matt's love of a great gathering, feel free to bring a beverage or two and stay a while.)