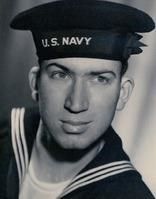 Known to everyone as "Bob", Dad was many things; a Navy man, a devoted and loving husband, loving father, beloved grandfather, selfless provider and, above all, a gentleman.

Dad was born in Oakland, California to Salvador and Mary Ferdinand. Mary, a loving and free spirit, and Salvador, the first child of Italian immigrants, a veteran of both WWI and WWII, owner of a Standard Oil service station, and after the war an Internal Revenue Service Agent, instilled in Dad a sense of service and a love and appreciation for the outdoors, camping, hunting, and fishing; especially fishing. The family moved to Visalia, California in the late 1940s, and it was there Dad met Glenda Bequette (August 1940 - December 2020) who was destined to be the love of his life, and our mom.

Dad served his country in the Navy from 1954 thru 1959 as an Aviation Electronics Specialist 2nd Class on the Aircraft Carrier USS Franklin D. Roosevelt, ending his service at U.S. Naval Air Station, Key West, Florida, where he and Glenda were married in 1958 and began their 61 year life journey together.

In 1959 they towed a travel trailer from Key West, Florida across country to Arcata, California where Dad worked in a lumber mill while attending Humboldt State University. It was there that their first son, Roger (Redmond, WA), was born. Their second son, Allen (Hollister, CA), was born soon after the family had moved to Aptos, California. In 1966 the small family settled in the Live Oak area of Santa Cruz County where they stayed until 1992.

Always one to serve, Dad was a Boy Scout Leader, a Volunteer Fireman for the Live Oak Fire Department in the 1970s; later serving as a Commissioner for the fire district until the mid 1980s.

In 1993 Dad found a dream property for Mom, and it was there that they retired in a small community south of Sacramento where, for a while, they kept sheep and chickens along with their beloved Labradors. They both, and Dad especially, enjoyed the myriad birds that populated the property year 'round and those that stopped-off on their yearly migrations.

Dad adored his grandsons Jason (London, UK) and Zach (Hollister, CA) looking forward to their visits and the opportunity to take them fishing or crawdad hunting in the pond on the property or to let them help gather eggs each morning. Especially rewarding was seeing his grandsons play with the many labradors that passed through our lives.

Dad and Mom will be interred, together forever, at the California Central Coast Veterans Cemetery in Seaside. May their love for each other last until the end of time.
Published by Santa Cruz Sentinel on Sep. 12, 2021.
To plant trees in memory, please visit the Sympathy Store.
MEMORIAL EVENTS
To offer your sympathy during this difficult time, you can now have memorial trees planted in a National Forest in memory of your loved one.
MAKE A DONATION
MEMORIES & CONDOLENCES
Sponsored by santacruzsentinel.com.
1 Entry
I remember Bob as a volunteer at Live Oak FPD.. RIP Sir !!
Daniel Barnes
September 13, 2021
Showing 1 - 1 of 1 results