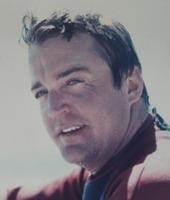 BORN
1966
DIED
2021
Robert Lahey
June 21, 1966 - September 2, 2021
Aptos, California
Robert Joseph Lahey, 55, of Aptos, the beloved husband of 24 years to Jennifer (Roberts) Lahey, and father to Emily and Abigail passed away Thursday, September 2, 2021 at home surrounded by his family. Rob was a courageous warrior in his fight against esophageal cancer for four years. Rob was born and raised in Palos Verdes, Ca, the son of Thomas Lahey and the late Joanne Lahey. He graduated from La Jolla High School in 1984. He then moved to Santa Cruz, California and graduated from the University of California, Santa Cruz with a Bachelor's degree in math and a teaching credential. Robert was a teacher of mathematics for 30 years in the San Lorenzo Valley Unified School District where he made many friends and touched multiple lives with his kindness, humor and love of teaching. Rob served as the math department chair for the last 19 years and was selected as the educator of the year by the SLV Chamber of Commerce in 2019.
In addition to his wife, Jennifer and daughters Emily and Abigail, Rob is survived by his father, Thomas Lahey of Incline Village, Nv, stepmother Catherine Logan Lahey of Nipomo, Ca, brothers Michael Lahey of Aptos, Ca and David Lahey of Oxnard, Ca. Robert was preceded in death by his brother Thomas Lahey. Rob is survived by nephews Taylor, Patrick, Sean, Noah and niece Kristyn.
The family thanks all of the special people who touched Rob's life. In lieu of flowers, donations can be made to a scholarship fund that is being established in Rob's name to support graduating SLV seniors aspiring to become a Teacher or major in Math or Science. Donations may be made at www.slvscholarships.com/rob FEIN #46-0502462
A mass at Resurrection Catholic Church will be held on November 13th at 1pm and a celebration of Rob's life will be held on November 14th at SLV High School on the football field beginning at 1pm.