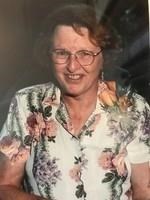 BORN
1938
DIED
2021
FUNERAL HOME
Mehl's Colonial Chapel
222 E Lake Ave
Watsonville, CA
Sheila Marie Doran (Robe) (McGee)
Sept. 14, 1938 - Aug. 15, 2021
Watsonville
Sheila M. Doran returned to the Lord Jesus Christ following a short battle with lung cancer at the age of 82. Born and raised in San Francisco, she attended St. Johns Ursuline Girls Catholic High School where she graduated in 1956. In 1958 she was married to John W. Robe with whom she bared and raised four rambunctious boys, Robert, Walter, David and Michael in Pacifica, Ca and later, after a divorce remarried to David E. Doran in Santa Cruz. Dave Doran came to the family with yet another two boys Jeffery Doran (JDD Doran-Jammer) and step-son Rick Doran. Together Sheila and Dave did what they could to manage all of that testosterone. Sheila was always trying to be a home maker while constantly battling the little home wreckers.
Sheila took some odd jobs when she could during her younger years. In high school, her first job was as an usher at the old Granada Theater on Mission Street in the Excelsior District of San Francisco. She once told me that her job was not only to help people locate their seat, but during the movie she would have to walk down the aisle with a flashlight and tell the patrons to please pick up their mess that they made under and around their seats. (Wow, try doing that now a days) Later she worked at the boys' favorite job with her sister Susan at See's Candy in South San Francisco. Need we say anything more? Just picture the "I Love Lucy Show "and four boys with mouthfuls of candy. While working that part-time/ temporary job, she also was the local "Avon Lady" and picked up a job at the local toy store.
Later, when she moved to Santa Cruz, she worked full-time for the County of Santa Cruz in their Social Welfare Department and at Mervyns during some nights and weekends until she retired and became a full-time employee there. Seems like she always had two jobs, besides that of raising children, a job in itself.
Some of the things she truly enjoyed in life were watching or going to Nascar Races. Richard Petty was her favorite. And when her son David and his friend Paul built a race car for the Watsonville Speedway guess where she ended up? In the pits as a pit crew member. She loved that more than anything. Well, that was a close second to reading romance novels. In fact, at the time of her death she had collected over 2000 romance novels even after she donated approximately 1000 more to a friend.
Sheila is missed but will always be remembered as the one who would take you in. She never turned anyone away! She is survived by her four boys and their significant others, and 2 step-sons. Three sisters, Terry, Joan and Sue, her brother Tom, and 16 Grandchildren, 13 Great grandchildren.
A Memorial-Celebration of Life service will be held for both David E. Doran (Military honors) and Sheila M. Doran at the California Central Coast Veterans Cemetery at 2900 Parker Flats Cut-off in Seaside, Ca 93955 on Tuesday September 14, 2021 at 2 PM. There will be a get- together with food provided afterwards at the Bayonet Blackhorse Grill. In lieu of flowers, the family suggests donating to your charity of choice. Amen, God is Great!

Published by Santa Cruz Sentinel on Aug. 31, 2021.
To plant trees in memory, please visit the Sympathy Store.
MEMORIAL EVENTS
Sep
14
Celebration of Life
2:00p.m.
California Central Coast Veterans Cemetery
2900 Parker Flats Cut-off, Seaside, CA
Funeral services provided by:
Mehl's Colonial Chapel
MAKE A DONATION
Please consider a donation as requested by the family.
MEMORIES & CONDOLENCES
Sponsored by santacruzsentinel.com.
2 Entries
May the love of friends and family carry you through your grief.
Rena
August 28, 2021
I am sorry to hear of your loss. Please accept my condolences. May the love of God, friends and family carry you through your grief. Please take comfort in the words found at 2nd Thessalonians 2:16,17.
DT
August 28, 2021
Showing 1 - 2 of 2 results