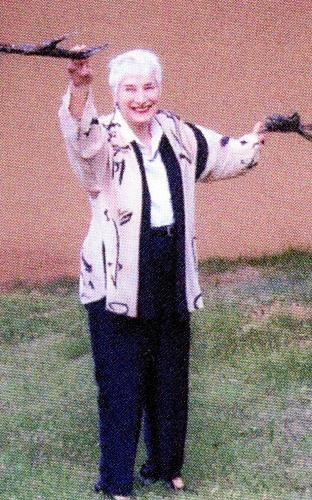 In Memoriam
Donna Quasthoff
The Santa Fe Opera mourns the passing of longtime friend Donna Quasthoff on September 1.
Donna, a sculptor who often worked in bronze, was best known in Santa Fe for the bronze doors of The Cathedral Basilica of St. Francis, for which she was commissioned in 1984. She also donated her sculpture, Orpheus and Eurydice, to the Santa Fe Opera in 1962, where it lived for many years near the front entrance to The Crosby Theatre. Today it delights artists, staff, and visitors on the lawn near Gaddes Hall on the opera's lower grounds.
Donna began attending performances at the opera in 1957, its very first season. Donna was working in Santa Fe as an architect, and bartending in the evenings at Claude's Bar on Canyon Road. Photographer Hope Curtis, Donna's partner since the inception of the opera, was running a summer theater company and met Donna at Claude's one evening. "It was the bar everyone went to," Hope said. Hope's most memorable opening night with Donna was Madame Butterfly in 1968 with soprano Maralin Niska.
Eventually Hope and Donna attended performances together. They met founder John Crosby in the Opera Club one evening. For over 60 years, they attended nearly every production, and for over 20 years, they generously sponsored female Technical Apprentices in lighting.
Everyone at the Santa Fe Opera will miss Donna, but her presence shines bright from her sculpture, which immortalizes the mythical Greek figures who also inspired operas by Monteverdi, Gluck, Offenbach, and others. Hope is looking forward to the 2022 Season.

Published by Santa Fe New Mexican from Oct. 16 to Oct. 17, 2021.
To plant trees in memory, please visit the Sympathy Store.
MEMORIAL EVENTS
To offer your sympathy during this difficult time, you can now have memorial trees planted in a National Forest in memory of your loved one.
MAKE A DONATION
MEMORIES & CONDOLENCES
Sponsored by The Santa Fe New Mexican.
0 Entries
Be the first to post a memory or condolences.