Penny Kielpinski
PENNY KIELPINSKI On February 8, 2015, Penny Kielpinski departed the world she passionately loved. With an exuberant smile and her shiny, bright hair -- "Redheads are smarter," she would whisper mischievously to the shy, skinny carrot tops in the supermarket checkout line -- Penny brought the world to life around her. She engaged total strangers in conversation, did handstands on the edges of cliffs, and penetrated the angsty hearts of teenagers in her classrooms for over thirty years. Penny left everything better than she found it, whether it was an abandoned farmstead, a bedraggled stray animal, or one of the schools where she taught. If there wasn't already something to improve, she created it from scratch - award winning choirs and gymnastics teams, popular Honors English and drama programs, and a renowned real estate business. Born August 17, 1944 in Chelsea, Massachusetts, and raised on the east coast, Penny felt lucky to spend her life in two beautiful parts of the west: The farm where she raised her family in the magnificent Columbia River Gorge, and her beloved home in the starry high desert of Santa Fe, where she spent her last fifteen years. Optimistic, playful, and proactive, Penny was driven to improve the lives of others, whether they were her students, her family, or the elderly whose bedsides she visited as a young woman with her children in tow. She loved and cared for every imaginable creature, from snakes and birds to llamas and sheep, including those at a sanctuary where she volunteered for five years. Penny was an avid reader and traveler and took special interest in stories of human and animal resiliency. She embodied resiliency herself and encouraged others toward their full potential. Especially tender toward those who were suffering, she uplifted spirits with a ready ear, a hardworking hand, a lovingly articulated card, or a clever poem or song. She took up marimba in her sixties, and reveled in playing its rich African rhythms with Polyphony, a Santa Fe band. While undergoing chemotherapy, Penny became a Certified Nursing Assistant so that she could ease the suffering of others. She was a lover of surprises and the generous giver of many gifts. She was also fully aware of being the recipient of the best gift of all, life on Planet Earth. She kept her birdfeeders full and her garden colorful, and found wonder in the world every day. Penny leaves a loving family behind, including her wife, Maria Santa Maria; her three daughters and two sons-in-law, Krysta and Barbu Panaitescu, Jenya Kielpinski, and Marina and Larry LeGree; her sister, Jane Brown; her brother and sister-in-law, Bob and Cherie Brown; her stepmother, Linda Brown; many beloved aunts and uncles, nieces and nephews, and cousins; and her cherished pets. She is preceded in death by her parents, Edith and Robert Brown. Her mother instilled in her a fierce love of the natural world and its wild creatures, along with a deep appreciation for and facility with the written word. Her father passed on his sense of humor, a love of music and drama, and the lifelong discipline that helped her accomplish her goals. She is grateful to Maria, to her three daughters, and to their father, Jan Kielpinski. Her loving, supportive, and cherished friends deserve to be named individually, but the list would be too long. She is grateful to each and every one. A service of celebration of Penny's life will be held at 2:30 p.m. on Saturday, April 11, at St. Bede's Episcopal Church in Santa Fe, New Mexico; reception to follow in the fellowship hall. In lieu of flowers, please honor Penny's passions by making a donation to the Espanola Animal Shelter (www.evalleyshelter.org) and/or to Ascend: Leadership Through Athletics (www.ascendathletics.org). While the writers of this obituary know that she would have preferred something shorter and more modest, we also know that we speak for many when we say that Penny will be deeply missed.
To plant trees in memory, please visit our Sympathy Store.
Published by Santa Fe New Mexican from Mar. 5 to Mar. 6, 2015.
MEMORIAL EVENTS
No memorial events are currently scheduled.
To offer your sympathy during this difficult time, you can now have memorial trees planted in a National Forest in memory of your loved one.
MEMORIES & CONDOLENCES
13 Entries
I am sitting in Loving Kindness meditation this morning, I am being trained and learning the concepts/teachings. I chose you to visualize Penny. I visualize the way you always closed your eyes and titled your head back when you shared your sharp laughter; I visualize when you would turn your entire body to face me, to look at me as I rambled, to hear me completely; I visualize the feeling that I knew we were meant to be connected all our lives - that you were to become an angel on this Earth for me. As I see you and feel what it was to be around you I say to you and for you, in the meditation;

"May this person have mental happiness. When difficult times come for her, may she not nourish or cultivate the pain - instead finding peace in midst the difficulty."

"May this person have physical happiness. May she enjoy good health and freedom from physical pain. May she live in harmony with the body. May physical pain not lead to mental torment."

"May this person have the ease of well-being. May her relationships, livelihood and family life be harmonious and enjoyable. May the elements of day to day life be free from struggle, and may they be accomplished gracefully and easily."

"I truly wish this person happiness"

I miss you. I am finding the courage and bravery to trust the love I now you had for me and to believe the memories are here to stay. You have been coming up a lot for me in the last 3 or 4 days Penny and I think you might be somewhere telling me to believe in angels again...

I love you. I am so blessed you came into my life as an ACT/SAT tutor and that we ended up bonding in a way no one would have predicted would have arisen out of such a simple initial relationship. I have been telling people lately that you were my mentor, my spiritual mentor, I must now return to listening to you even though you aren't physically here - I am listening for your voice, I am trying, I promise.

Every time I say or spell a word wrong I laugh and feel you. Ha ha! Like every time I say "minuet" instead of "minute." I chuckle to myself. I suppose its in the little things.
Delaney Covelli
September 10, 2015
Penny brought such joy to all lives that she touched. It was our blessing to have known her...
Caroline Maupin
June 30, 2015
My thoughts are with you in this time of loss Maria. Penny surely had a way of lighting up the room! Your many wonderful memories will be with you always.
Marianna
April 2, 2015
So sorry to hear of Penny's passing. What an amazing woman. I am so glad that I got to know her and love her.
Catherine Copeland
March 28, 2015
My heartfelt condolences to Penny's family in this time of loss. She truly was a lovely spirit and will be missed greatly.
Terri Bianchi
March 12, 2015 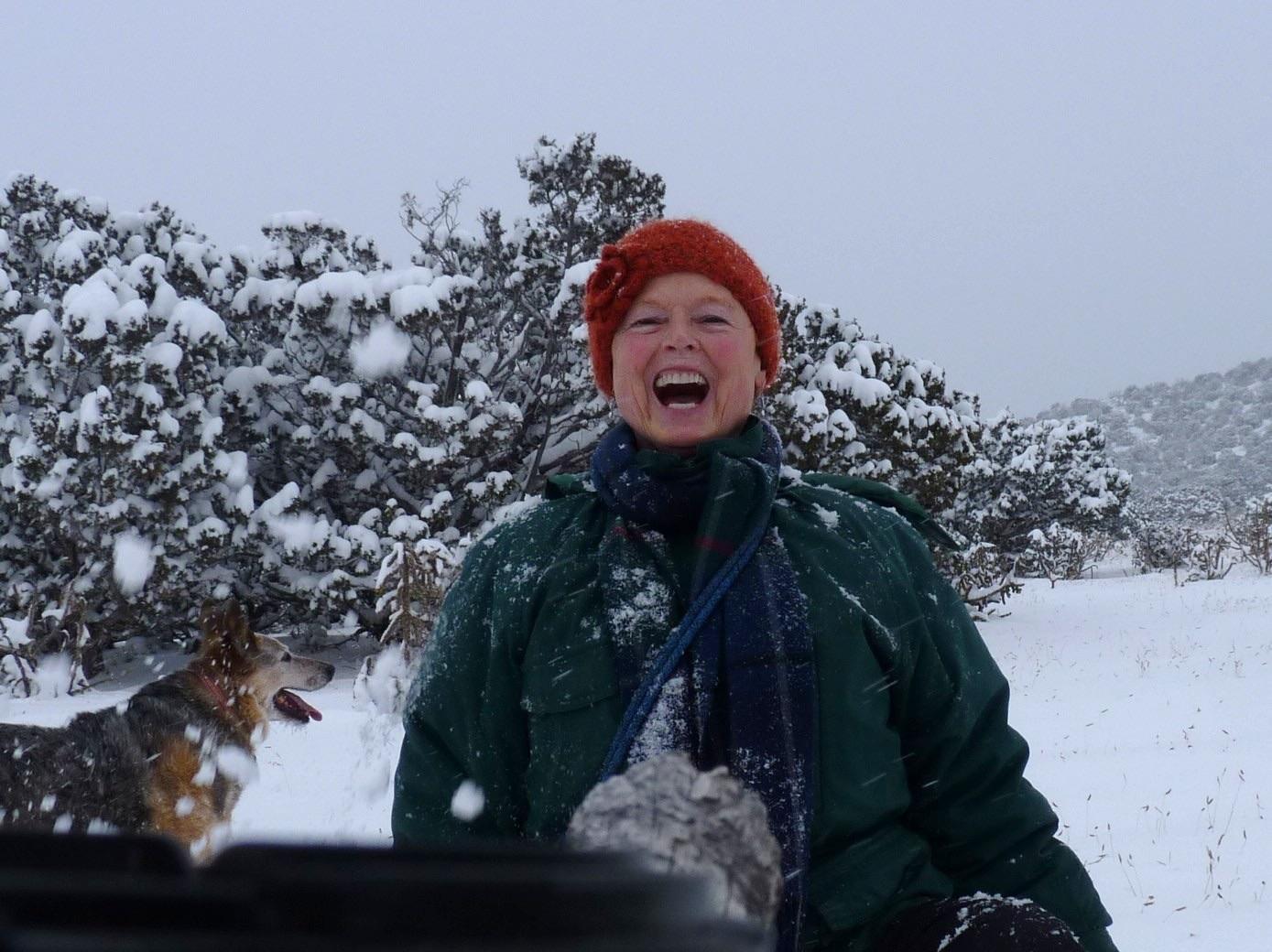 Our hearts are grieving, but our lives have been enriched by having had Penny as a friend.
Andrea Bermudez and Deb Shaw (Santa Fe, NM)
March 11, 2015
Penny was a sweetheart. I remember well when we started real estate life. I knew she left the business but didn't know why. A lovely spirit.
susan munroe
March 9, 2015
I went to high school and Bates College with Penny--she was my "little sister" at Bates. She was "large" in living and loving I last communicated with her just before my High School Reunion and laughed so much at her sense of humor about high school reunions My prayers are with her family and friends ---the world will miss her and Heaven has to be ready for her passion-- she will keep the "other" angels on their toes-- probably teaching them gymnastics but certainly alot of love Ann Kramer
March 8, 2015
It has been years since I last saw Penny, but when I learned of her passing, the years evaporated and I cried for the loss of one of the brightest lights of my high school days. Be with God, Penny Brown.
Sidney Gates
March 7, 2015
I knew Penny in high school and through reunions and FB in our later years. I'm so sorry for her loss but blessed to have known her.
Judith McDonald Theocles
March 7, 2015
Ms. Kielpinski was a light in my early teens and I'm glad I had opportunity to be educated by her. Blessings to those who knew her best, her beautiful soul will be dearly missed on this earth.
Julie Garcia
March 6, 2015
Penny was a wonderful friend who always inspired us with her courage and resilience. We will miss her but she will never be forgotten.
Mirtha Sibles
March 6, 2015
Penny was a wonderful person, very upbeat and fun to be around. I was very saddened to read about her passing. She will be greatly missed. My condolences to everyone involved.
barbara Zimmerman
March 6, 2015
Showing 1 - 13 of 13 results