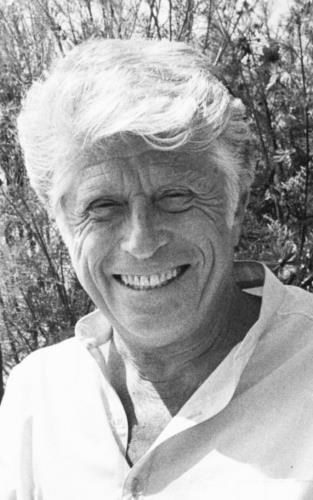 BORN
1927
DIED
2021
VICTOR DI SUVERO
Victor di Suvero, age 94, passed away peacefully in his sleep on July 6, 2021 at 2:30 a.m., at Scott's House ~ Santa Fe, NM, under hospice care of Glenys Carl along with her kind, caring staff. Victor was born May 20, 1927 in Turin, Italy. His father moved the family to Shanghai, China and later fled to San Francisco in 1942 in order to avoid returning to a war-torn anti-Semitic Italy. In 1944, Victor served as a US Merchant Marine returning later to California to attend UC Berkeley.
He met Henrietta Amundsen and her son Marius in the late 1950s. They had two children, Romana and Alexander. Among many endeavors, Victor became known as a poet, an activist in the Bohemian arts scene, and a key player in many artistic projects including the 5-story mosaic on the side of the Liberty Building, downtown Los Angeles, California. Curator and producer of The National Poetry Festival in San Francisco. He was a founding member of National Poetry week, which later became National Poetry Month. He was an integral part of various projects involving his good friends Jean Varda, Alan Watts, Maya Angelou, John Lilly, and so much more.
Victor got together with Barbara Windom in the early 1980's. Together they started Pennywhistle Press in San Francisco and then moved to Santa Fe in 1987 where he continued Pennywhistle Press, publishing various poets throughout the years, and published 14 books of his own. He was instrumental in the formation of Live Poets Society, PEN New Mexico and the New Mexico Book Association. He was awarded the Governor's Award for Excellence in the Arts of New Mexico in 2019.
Victor was all this and so much more... we could publish a book!
Victor is survived by brother Mark and family, sister Marie Louise and family; his children, Romana, Alexander and wife Flora, his stepchildren Marius, Maggie, Debora, Rachel, and families; 3 grandchildren, Ava, Julia, and Catherine; loving friends and relatives scattered around the world, and his longtime assistant, Brandy. He was preceded in death by his brother Henry di Suvero, Henrietta di Suvero, and Barbara Windom.
A memorial will be held on August 22nd from 2 to 4 at the New Mexico School for the Arts courtyard. Call 505-316-3736 for more information.
Victor will be remembered by many for his warm heart and his kind enthusiastic approach to life ~~

Published by Santa Fe New Mexican from Jul. 24 to Jul. 25, 2021.
To plant trees in memory, please visit the Sympathy Store.
MEMORIAL EVENTS
Aug
22
Memorial service
2:00p.m. - 4:00p.m.
New Mexico School for the Arts courtyard
NM
MAKE A DONATION
MEMORIES & CONDOLENCES
Sponsored by The Santa Fe New Mexican.
2 Entries
He was a poet and a gentleman and a wide open window into the soul of the arts....God's speed whilst going into that good night Victor.
Cara Leigh
July 30, 2021
Victor delighted all of us in book publishing, printing, and finding readers! Victor joined with me and a few others in the founding of the New Mexico Book Association.
Richard Polese
Friend
July 28, 2021
Showing 1 - 2 of 2 results