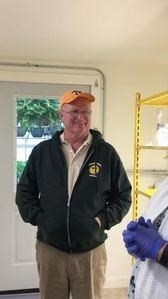 Ned (Edward) Chapman was a beloved husband, father, grandfather, brother, and son who will be missed every day. Ned passed away Sunday, July 28 surrounded by the love of his family. All who knew him will remember him for his enormous kindness, generosity, optimism, and incredible sense of humor.Ned and his wife, Bonnie, opened Sunnyside Gardens in 1978 in Niskayuna, NY before moving the business to Saratoga Springs in 1982. His favorite part of the business was growing plants and he always strived to have the best flowers in the area. He was a true businessman at heart and his most recent passion was his Christmas tree farm in Perth, NY. He loved just walking around the fields, checking out how well the trees were growing.As a successful business owner in Saratoga, he was most proud that it allowed him to contribute to a variety of charities and organizations. He was generous with his time and would bend over backwards to help other families or businesses in need. He was a true gentleman and friend to everyone. He had a lifelong love of trains and believed real men wore pink.He adored kids, especially his four grandchildren (Claire, Magnus, Hannah, and Kelso), and loved hearing children’s laughter each fall during Sunnyside’s Pumpkin Patch season.He will always be loved and remembered by his beloved wife, Bonnie; his children Lea, Heather, and Kip; his much loved grandchildren Claire, Magnus, Hannah and Kelso; his mother Janet; his sisters Jannie and Helen and their husbands (Russ and Scott); his sons-in-law Graham and Joe; and his numerous nieces and nephews; as well as his larger extended family of numerous in-laws. Ned was pre-deceased by his father, Donald D. Chapman. It was a running joke in the family that everyone had worked at Sunnyside at one time or another.The family would like to thank the numerous nurses, doctors, and support staff at Norris Cotton Cancer Center at Dartmouth-Hitchcock Medical Center who helped care for Ned over the past months. They would also like to thank his local physicians and Community Hospice of Saratoga County for their support and kindness over the past few weeks.Services will be private. In lieu of flowers (because god knows, we have enough), please make a donation to Community Hospice of Saratoga County. http://www.lastingmemories.com/ned-edward-chapman
Published by The Saratogian from Aug. 1 to Aug. 3, 2019.
To plant trees in memory, please visit the Sympathy Store.
MEMORIAL EVENTS
To offer your sympathy during this difficult time, you can now have memorial trees planted in a National Forest in memory of your loved one.
MAKE A DONATION
MEMORIES & CONDOLENCES
Sponsored by Saratogian.com.
17 Entries
So sorry to hear of Ned's passing. Those of us in his high school class who had lost touch with him just heard of it in April, 2020. I had several classes with him in junior high and high school, and we were both involved in athletics together. He had a great sense of humor and was a lot of fun to be with. He was probably the most athletic person in our class, though since he limited himself to one sport (track and field) after his freshman year, he didn't get as much recognition as other multi-sport guys. The tributes I read here are not at all surprising. As a young man his character was solid and it seems that carrried through to his entire adult life. RIP my friend.
Randy Perry
April 4, 2020
To all the Chapman family We wish to send our deepest condolences. Jan and Bill Murphy Jan's Florist
August 10, 2019
I was so sorry to read of Ned's passing. As a teenage friend of Helen's, I was at their home numerous times, and Ned, as the big brother, was always kidding around and smiling. Such a great guy, I still smile at the memories. My condolences to the family, my thoughts and prayers are with you all.
Peg Tappan Anunziatta
Acquaintance
August 7, 2019
Bonnie,Lea,Heather and Kip...just heard the sad news of Neds passing . I am so very sorry for your loss. Heavens gardens will be alot more beautiful with Ned there.
With love and sympathy Barb Phillips
Barbara Phillips
August 6, 2019
Our thoughts and prayers go out to Bonnie and family. Ned will always be remembered by the Boyd family for his kindness, integrity and business ethics. I will always remember Ned as just a good friend and one of the best people I have ever had the pleasure of knowing.
His smile and chuckle will be missed but heaven has gained a great man and a great garden keeper.
Barry and Cheryl Boyd
Barry Boyd
Friend
August 6, 2019
I will miss Ned and his always cheerful greeting whenever I saw him. He was a gentleman and a friend to all.
Ernie Gailor
August 6, 2019
We are very sorry for your loss. Ned was a wonderful man. One that will be missed by us especially Tim. The Barnes Family.
Tim Barnes
August 5, 2019
I was very upset to hear of Ned's passing. I will always remember that he and Sunnyside were the first employer I ever had. ( I was only 15) He gave me a chance and even though I was easily distracted and talked a lot back then he always treated me with the utmost respect. I'll never forget his encouragement and optimism. Sunnyside will always mean a lot to me and he will be greatly missed when I come home to visit. My condolences to the Chapman family in this difficult time.
Baleigh Closson
August 5, 2019
Very sorry for your loss. My condolences. He was such a nice man.
Katie Salmon
August 3, 2019

As a frequent customer at Sunnyside over many years, I am so saddened to learn of Ned's passing. He helped create so many traditions at Sunnyside for families in this area. My sympathies to his family for this deep loss. May his memory be a blessing.
Faye Mihuta
Faye Mihuta
August 3, 2019
So sorry to read of Ned's passing. Condolences to Bonnie, Lea, Heather and Kip. All the extended family too, it has been many, many years.
Dianne Chandler Lundgren
August 3, 2019
What a kind man Ned was. I enjoyed working for him for so many years. My thoughts are with Bonnie, Lea, Heather,Kip and the rest of the family. ❤
Kim Munn-Harrison
August 3, 2019
RIP my friend till we meet again...Bonnie so sorry for your loss may the fond memories help you fill the void in your heart
Sandra Foster
August 3, 2019
I'm so sorry to hear of Neds passing my thoughts and sympathy to all of you.
Marilyn Slater
August 2, 2019
I was so sorry to hear of Ned's passing. I really enjoyed working for your family and have the best memories of my time at Sunnyside.
Lori Zareski
August 2, 2019
So sorry for your loss Bonnie and family. Gods love and blessings are with you. May he Rest In Peace
Valerie Riggi
August 2, 2019
Our deepest sympathies go out to Neds family and his extended family at Sunnyside. We've enjoyed three generations of seasonal flowers, pumpkins, train rides and Christmas trees. Our yearly traditions at Sunnyside will continue and surely Neds advice and warm welcoming smiles will be missed. Heaven has gained a master gardener for sure...Rest easy Ned
Sincerely, Robin Carnevale Schwedt and family
Robin Schwedt
August 1, 2019
Showing 1 - 17 of 17 results