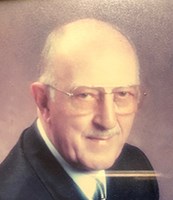 BORN
1933
DIED
2020
FUNERAL HOME
Burke-Tubbs Funeral Home - Freeport
504 N. Walnut Street
Freeport, IL
Donald Milton Matthews
Born: July 10, 1933 in Oak Park, IL
Died: December 15, 2020 in Indio, CA
Donald Milton Matthews, 87, formerly from Morrison and Freeport, IL area, passed away unexpectedly December 15, 2020 at JFK Memorial Hospital in Indio, CA.
He was born July 10, 1933 in Oak Park, IL and raised in Morrison, IL. He graduated from Morrison High school in 1951 and enlisted in the U.S. Navy in 1952. He worked as a radioman until his enlistment ended in 1956. He enjoyed playing the trumpet in his High School Band and the Navy Band. He also played with a band at the Morrison VFW after the Navy and entertained friends and family after moving to Freeport, IL in 1966. He played Taps for many military funerals. Don spent the rest of his working career as a Wholesale Beer Distributor. He was co-owner of Mathews Distributing Company in Freeport, IL until his retirement in 1995 at the age of 62. Don loved spending retirement driving his Prevost Bus through Alaska, Canada, the continental United States, and Mexico. He was still driving his bus yearly from California to Illinois at the age of 87. Don was known as a storyteller, loved visiting with his nieces and nephews, and was thrilled to walk one down the aisle when she got married in 2014.
Don is survived by his wife, Betty Matthews of Indio, CA; son, Vincent Matthews of San Diego, CA; brother, Gordon (Henrietta) Matthews of Sebastian, CO; and nieces and nephews.
Don was preceded in death by his parents.
Memorial services were held December 30, 2020 in Cathedral, CA.
Local arrangements were assisted by Burke Tubbs Funeral Home, Freeport, IL. Please visit www.burketubbs.com to share a memory of Mr. Matthews.

Published by Sauk Valley News from Sep. 20 to Sep. 28, 2021.
To plant trees in memory, please visit the Sympathy Store.
MEMORIAL EVENTS
To offer your sympathy during this difficult time, you can now have memorial trees planted in a National Forest in memory of your loved one.
Funeral services provided by:
Burke-Tubbs Funeral Home - Freeport
MAKE A DONATION
MEMORIES & CONDOLENCES
Sponsored by Burke-Tubbs Funeral Home - Freeport.
0 Entries
Be the first to post a memory or condolences.