BORN
1935
DIED
2021
UPCOMING SERVICE
Visitation
Nov, 6 2021
1:00p.m. - 3:00p.m.
Zion United Church of Christ
Send Flowers
Jack V. Cole
Born: September 16, 1935 in Attica, IN
Died: September 21, 2021 in Peoria, IL
Jack Cole went home to be with the Lord on September 21st, 2021. Jack had just had his 86th birthday on September 16th.
Jackie Vaughn "Jack" Cole was born in Attica, Indiana in 1935 to Mildred (Pitzer) and James "Pete" Cole. He was the last of Mildred and Pete's 5 boys to pass away, as he was preceded in death by his brothers Jim, Joe, John and Claude. He is survived by his wife Edith of Morrison, IL, children Jeff (Anne) of Kirkland, WA, Karen Maarouf (Noureddine) of Fairfield, CA, and Adam (Dana) of Oakwood Hills, IL, as well as five grandchildren Tyler, J. Morgan, Travis, Hannah, and Amanda.
The family moved sometime around 1943 to St. John, Indiana and purchased 3 acres. The seven of them lived in a garage and breezeway, sleeping on army cots, until Jack and his two younger brothers finished building the house when Jack was about 17 years old. This was the first of many building projects he'd undertake, as he built his first home with the help of his brothers, and did all his own home repair and renovations through the years.
Jack was a three-sport letterman in football, basketball and baseball for Dyer (IN) high school. During a radio interview after a basketball game, the coach of the much larger Hammond High School stated "that Cole kid could play for me any time - he really knows the game". He was a great hitting third basemen in baseball, and a tackle on both sides of the ball in football. Jack graduated from Dyer High School in 1954.
Jack met his bride of 63 years, Edith Bremer, when she spilled a root beer float on him while she worked as a carhop at Dog n Suds in St. John. They were married on February 15th, 1958 at Zion United Church of Christ in Dyer, Indiana.
Jack was an incredibly hard worker, and he started working at a young age. He was a pinsetter at the bowling alley when he was 14, and had three model A's - one to drive and two for parts - so he could get to the bowling alley. He went on to work as a Bricklayers Assistant, line worker in a bottling plant, line worker at a Ford stamping plant, and a tow truck driver. After these experiences, he never worked for anyone else again - he simply wanted to be his own boss. He owned and operated a trucking business hauling sand and gravel for new home developments in St. John until 1972.
While he loved trucking, he loved his family more, and he and Edie decided to move their young family to a smaller town. He was able to make that happen by taking an ownership stake in a new car dealership with one of his high school friends from St. John. He was a partner in two separate dealerships in Morrison from 1972 until his retirement in 2000.
Jack was competitive in every game he played - from golf to Rummikub. He also strove to have fun in whatever he was doing. He teased relentlessly, and could take a good ribbing as well. He was also kind to all, and worked hard to make certain everyone was having fun along the way. He was a loving husband, father, grandfather and friend. He will be sorely missed by those who loved him, and especially those looking for a 4th at Emerald Hills Golf Course.
Jack was active in the Morrison Chamber of Commerce, past president of the Morrison Country Club and an active member of the Morrison United Methodist Church, most recently serving on the Staff Parish Relations Committee.
A visitation will be held for Jack at Bosma Renkes Funeral home in Morrison, Illinois on October 16th between 2:00 pm and 5:00 pm. His funeral will be held at the Zion United Church of Christ in Dyer, IN at a later date, to be determined. The Morrison Chapel of the Bosma-Renkes Funeral Home is in charge of arrangements.
To send online condolences go to www.bosmarenkes.com 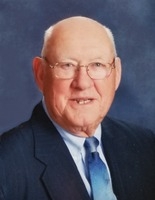