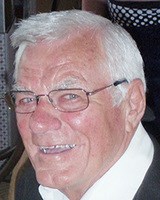 BORN
1933
DIED
2021
James Harlan Beswick
Born: June 26, 1933 in Sterling, IL
Died: July 8, 2021 in Carrolton, TX
James "Jim" Harlan Beswick, 88, died quietly July 8, 2021, in Carrolton, Texas, from complications of dementia, surrounded by his family.
He was born June 26, 1933, in Sterling, Illinois, to Raymond and Marie Beswick, a long time farming family of Morrison. Jim graduated from Morrison Community High School in 1952, where he participated in a number of athletics and earned a BS degree from Western Illinois in 1977. He married his high school sweet heart, Sally Lee Petersen, in 1954. They celebrated 67 years of marriage. They had three children, Frankie Marie Beswick Hood of Morrison, Colorado, James Harlan Beswick Jr. of Conroe, Texas, and Jamie Lee Norman of Flower Mound, Texas.
Jim was drafted in the U.S. Navy and served from 1955 to 1957 as a battery specialist on the USS Hancock, that toured the Korean and Japanese waters shortly after the Korean War.
Upon release from the military, he and his wife relocated to Boulder, Colorado, where he attended the University of Colorado. Jim and his wife Sally decided to make Colorado their home, having all three of their children in the Denver/Boulder area.
The family farm needed his assistance requiring Jim to move his family to Morrison in 1966, where he spent the next twelve years until it became necessary that he relocate his family out of the area. Moving back to Colorado, Jim worked for the USDA Soil Conservation Service in Salida, Colorado, as a field engineer, working with local ranchers. He transferred to Denver in 1988 and worked as hydrologist for the Colorado Snow Survey District, maintaining snow survey sites in 5 western states. He retired in 2000.
Jim's passion was working on his Alpine "diesel pusher" motor home and traveling extensively for the next 19 years with his wife throughout the country, visiting many NHRA tracks and RV spots in Arizona and Texas. His highlight was attending the Indy 500 and meeting Roger Penske in his garage at the track. He was known for his "can do" attitude and dancing skills as one of the last good dancers of his generation.
Seldom indoors, Jim maintained an active lifestyle moving from Colorado to Arizona and then ultimately to Flower Mound, Texas. Jim was a member of the Elks Club, Veteran of Foreign Wars and the Alpine Motor Home Association.
Survivors include his wife, Sally Lee; three children, Frankie Hood, Jim Beswick Jr, and Jamie Norman; and his three grandchildren, Alexandra (Norman) Bumpass, Addison Lee Norman and Austin James Norman.
Memorial donations may be made to the Fisher Center for Alzheimer's Research Foundation. His ashes will be laid to rest at Grove Hill Cemetery in Morrison.
Jim was the family rock and his magnetic smile will be missed by many.

Published by Sauk Valley News from Jul. 23 to Jul. 27, 2021.
To plant trees in memory, please visit the Sympathy Store.
MEMORIAL EVENTS
To offer your sympathy during this difficult time, you can now have memorial trees planted in a National Forest in memory of your loved one.
MAKE A DONATION
MEMORIES & CONDOLENCES
0 Entries
Be the first to post a memory or condolences.