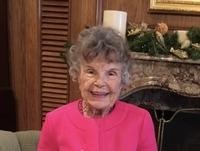 BORN
1918
DIED
2021
FUNERAL HOME
Fox & Weeks Funeral Directors
7200 Hodgson Memorial Drive
Savannah, GA
Elizabeth Mercer Hammond
Savannah
Elizabeth Mercer Hammond, wife of the late Christopher C. F. Hammond, Jr., passed away peacefully on January 11, 2021 at the age of 102. Mrs. Hammond was born on August 10, 1918, in Savannah, GA.
Known to her friends as Libby and to family as "Zebie," Mrs. Hammond lived more than 100 of her years in Savannah. As the niece of famed, Savannah-born songwriter Johnny Mercer, "Moon River" and the low country area were very special to her. Christened in Christ Episcopal Church as a child, Mrs. Hammond remained a communicant there until her death. She had been actively involved in many local organizations, including the Junior League of Savannah and the Colonial Dames of Georgia. She was also a former board member for both Bethesda Home for Boys, and the Hope School for the Deaf. At the time of her death, she was still a member of Friends of Bonaventure and Friends of Johnny Mercer. For more than a century, Mrs. Hammond generously supported many local charities and Savannahians in need. Incredibly gracious, she would give someone the shirt off her back without a second thought.
Mrs. Hammond graduated from Savannah's Pape School for girls in 1936 and attended Sweet Briar College for women in Lynchburg, VA. She later took an extensive tour of Europe, and upon her return, married Chris Hammond Jr., of Kathwood, SC, on November 23, 1937. The two enjoyed 73 beautiful years of marriage, raising three sons together before Mr. Hammond passed away in 2011 at the age of 98.
Mrs. Hammond's grandfather founded The Savannah Blowpipe Company in 1900, the predecessor of Great Dane Trailers. Upon their marriage, Mr. Hammond began working as the first trailer salesman for the company. He eventually became president of Great Dane, and during his long career, Mrs. Hammond accompanied him on many trips and adventures, collecting wonderful experiences, memories, and friends along the way. They particularly loved traveling abroad and fishing in the Bahamas together.
Mrs. Hammond was a charming, colorful lady, both literally and figuratively. She loved all things bright and beautiful and took great pride in her flowers that she tended to at her Ardsley Park and Lawndale Drive homes, where she spent most of her life. She was always dressed in bright hues, often pinks or purple, and the vivid shades reflected her radiant personality.
Mrs. Hammond defined the word sociable. Whether it was a cocktail hour or the birthday of a great-grandchild, Mrs. Hammond would have her calendar marked and be ready 45 minutes early. She loved a party and was always the life of the party. Some of her happiest days were spent entertaining friends at her Tybee vacation home or hosting family for her parties in her beloved pool. She was famous for her humorous and witty toasts, and had amazing fortitude and zest for life. Even after reaching her 100th birthday milestone, Mrs. Hammond never slowed down, and her memory remained intact. She was the matriarch of a large sprawling family and lived to enjoy her 9 grandchildren, 15 great-grandchildren, and 4 great-great-grandchildren. She knew them all by name and never forgot a birthday. She leaves a great legacy of spirit, love and laughter.
In addition to her husband, Mrs. Hammond was preceded in death by her parents, Bessie Wheless Mercer and George A. Mercer, Jr.; and by her brother George A. Mercer, III and nephew George A. Mercer, IV of Savannah. She was also preceded in death by all of her contemporaries and childhood friends because she outlived them all.
She is survived by her three sons, Christopher C.F. (Kit) Hammond and wife Karen, Pearce W. Hammond, George A.M. Hammond and wife Dena; her grandchildren, Liz Carter, Sandi Lowe, Chris Hammond, Sean Hammond, Dale Bowers, Pearce Hammond, Jr., Delia Zielinski, Heather Filgate and Drew Shessel; her great-grandchildren and great-great grandchildren; her nieces, Bessie Mercer Halsey and Wayne Willis; her special friend and caregiver Kathleen Clark; her many friends at The Marshes of Skidaway Island, and the thousands of people who were lucky enough to know the remarkable Libby Hammond. Heaven has just become a more entertaining place.
Private graveside burial at Greenwich Cemetery.
In lieu of flowers, donations can be made to Savannah Speech and Hearing Center, Memorial Sloan Kettering Hospital for Cancer Research in New York, NY, Hospice of Savannah and Christ Church Episcopal.
Please sign our online guestbook at www.foxandweeks.com
Savannah Morning News
Please sign our Obituary Guestbook at
savannahnow.com/obituaries

Published by Savannah Morning News from Jan. 12 to Jan. 13, 2021.
To plant trees in memory, please visit the Sympathy Store.
MEMORIAL EVENTS
To offer your sympathy during this difficult time, you can now have memorial trees planted in a National Forest in memory of your loved one.
Funeral services provided by:
Fox & Weeks Funeral Directors
MAKE A DONATION
MEMORIES & CONDOLENCES
Sponsored by SavannahNow.com.
2 Entries
Our condolences to Kit, Pearce, George and family. She was a great Lady whose memory will live through her good deeds for others and her love for her family.
Bobby Thomas
Friend
January 13, 2021
The passing of a beautiful lady after a long life well-lived. Rest in Peace, Libby.
J. David Carson, M.D.
Friend
January 13, 2021
Showing 1 - 2 of 2 results