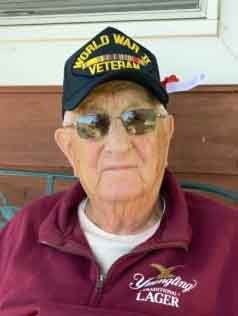 Joseph was born Dec. 7, 1924, in Branchdale, a son of the late Mary (Lovelick) and Michael Hudock.

He was a member of Saint Michael the Archangel Church of the Holy Family Parish, Minersville, and of the former St. Vincent de Paul Church, where he once served as a eucharistic minister of both.

He was a graduate of Pottsville Catholic High School.

He was a veteran serving in the Army.

He was employed as a machinist at ALCOA.

Joe was a lifetime member of the Mountaineers Fire Company and a 50-year faithful participant at the Malvern Retreat. He was an avid golfer, sinking his first hole-in-one May 24, 2006. He was an ardent fan of Penn State football and all the Philadelphia sport teams. Joe was a loving husband and family man who had a strong religious faith.

In addition to his parents, and his wife, Catherine, he was preceded in death by a brother, Michael Hudock; two sisters, Theresa Kaster and Mary Gustitus.

Joe is survived by a son, Joseph M., husband of MaryJane Hudock; two daughters, Mary Ann, wife of Lee Harvilla, and Peggy, wife of Thomas Dallago. He is also survived by a sister, Florence Trabosh; a brother, Francis Hudock.

A Mass of Christian Burial will be celebrated at 10 a.m. Saturday at St. Michael the Archangel Church, with the Rev. Jason F. Stokes officiating. A visitation with a calling hour from 9 a.m. to the time of Mass. will be held in St. Michael's Chapel. Interment is private. In lieu of flowers, memorial contributions may be made to St. Michael the Archangel Memorial Fund, 538 Sunbury St., Minersville, PA 17954. Mahal-Ritzel Funeral Home Inc., Minersville, is entrusted with arrangements.

Published by Republican & Herald on Dec. 8, 2021.
To plant trees in memory, please visit the Sympathy Store.
MEMORIAL EVENTS
Dec
11
Calling hours
9:00a.m. - 10:00a.m.
St. Michael the Archangel Church Chapel
538 Sunbury St., Minersville, PA
Dec
11
Mass of Christian Burial
10:00a.m.
St. Michael the Archangel Church
538 Sunbury St., Minersville, PA
Funeral services provided by:
Mahal-Ritzel Funeral Home, Inc.
MAKE A DONATION
MEMORIES & CONDOLENCES
Sponsored by Mahal-Ritzel Funeral Home, Inc..
7 Entries
Peggy and Family, so very sorry for your loss. What a great, friendly guy your Dad was !! I still remember him stopping at my house to take me to kindergarten . Remember all the good, happy moments with your Dad and he will live forever in your heart. My thoughts and prayers are with you. Rosann and Family
Rosann Sitkus
Friend
December 12, 2021
Dear Hudock Family, May you find comfort at this time in the Wonderful memories that you made with your Dad and Pop. Know that he is with Our Lord and your Mom enjoying all the Gifts that are promised to us in Heaven. When you watch the "Flyers", know that he is watching right along with you and cheering! Peace and Prayers sent to you all! Love, Lisa & Andy Konkus
Lisa Donlin Konkus
Friend
December 12, 2021
To the Hudock Family My deepest sympathy to you; may the Lord bless you with peace and strength during your time of loss. Mr Hudock will be greatly missed. He was always a sweet and friendly man. He never would accept a ride but enjoyed his walks. Mr Hudock is now living a perfect life in a perfect world with a perfect Lord on the greens playing golf. Enjoy Sir!
Sandy Jones
Friend
December 11, 2021
RIP Joe May you Rest In Peace
LaLa
Friend
December 8, 2021
Peggy and Family, Very sorry for your loss
Sue Kirby
Friend
December 7, 2021
Sorry to hear of Joe's passing, he was one great guy. He will be truly missed by all the knew him; especially, all his golfing buddies from Hidden Valley!
[email protected]
Friend
December 7, 2021
Hudock Family- So very sorry to hear of your Dad's passing. He was certainly a very special man and I'm fondly remembering him today on DDay. Keeping you all in my thoughts and prayers.
Karen Belas Connors
December 7, 2021
Showing 1 - 7 of 7 results