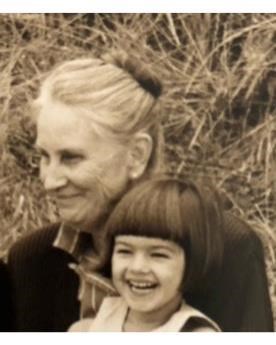 Graceful, caring and kind, Anne chose nursing as her profession. After completing nursing school at Bon Secours Maryview Medical Center, Portsmouth, Virginia, in 1956, and anesthesia training at Duke University School of Nursing in 1958, Anne began her career as Nurse Anesthetist at Cornell University Hospital in Manhattan. Years later in 1963, on a whim, she left the East Coast with some friends and set out for Seattle. She quickly found work at Virginia Mason and later at Everett General Hospital.

Although she was raised in a family of Irish Catholic Democrats, in the summer of 1964 Anne met the love of her life, Charles E. Shigley, Jr., at a Young Republicans cocktail party, explaining "Republicans threw better parties." They married in February, 1965, and were by each other's side for 56 years.

Anne believed in service and standing up for those who could not stand up for themselves, and served for many years as a volunteer advocate for victims of domestic violence.

Anne ("Annie" to Chuck and a select few close friends) was the consummate hostess. Whether she was making her one-of-a-kind potato salad by the bucketload for Fourth of July cookouts or a Thanksgiving dinner for 20, she made it look easy. Her advice to her new daughter-in-law was, "Never leave your guests to clean up, the dishes can wait until morning."

More than anything, Anne enjoyed warm summer days on her porch in the company of friends and family at her home at Kayak Point on Port Susan Bay. Anne loved watching her grandchildren grow up playing on the beach and being "Beach Grandma" to their friends.

Brave, determined, humble and loving. Anne knew her own mind and taught her granddaughter that being the only woman in the room shouldn't stop her from being the boss.

Anne is survived by her husband, Charles, her son and daughter-in-law, Chuck and Tracey, her granddaughter, Bailey, and grandson, Ryan. She was the steadying force for the Shigley family for decades. We will miss her dry sense of humor, her endless patience, and the enormous warmth of her love.

At Anne's request, there will be no memorial service. In lieu of flowers, please send a donation in Anne's name to the Stanwood/Camano Food Bank.
Published by Stanwood Camano News from Jul. 13 to Jul. 14, 2021.
To plant trees in memory, please visit the Sympathy Store.
MEMORIAL EVENTS
To offer your sympathy during this difficult time, you can now have memorial trees planted in a National Forest in memory of your loved one.
Funeral services provided by:
Gilbertson Funeral Home and Cremation Service - Stanwood
MAKE A DONATION
MEMORIES & CONDOLENCES
3 Entries
I have admired and loved Anne for as long as I can remember. Over the years, my dad teased that I should marry C3 for the house and property. However, we were blessed by this lack of chemistry as Chuck introduced me to my husband and if I were in jail or would need to hide a body --- Tracey, who I love, would be on my list of accomplices to call. As she was making her journey out of this world, I reminded Anne of some wisdom she had shared with me 27 years before.... right before I got married, I boated over to visit with Chuck and Anne. .... I asked her, "How did you and Mr. Shigley make it? You are very different but seem so compatible?" She paused and said with a wink and glare "You will not always like your husband." She gave some date but I will randomly assign it ...she said "1968 was the worst year of my marriage but I hung on and 1972 was the best". "Hang on, babe" - she said. Best marriage advice ever. As I told her this memory as she laid in bed, she chided Chuck with a grin that only deep love would garner. I will miss her dearly. Ex's and Oh's .... Nancy
Nancy Sherry Baker
July 19, 2021
Dear Chuck, The loss of Annie was a shock to me. In my world you are a young couple in your thirties. You are still a talented working artist and Annie is a busy nurse hustling off to work while looking forward to the birth of your new son. I fondly remember but also regret that week some fifty odd years ago when you welcomed me into your home. I always wanted to apologize to both you and Annie for that evening you sat there in your living room while I droned on in a shameful display of self pity over a failed love affair I had with a women in Florida where I was studying with the artist who was Lud' s mother's mentor. It had to be one of the worst evenings Annie ever sat through. She could have told me to shutup but instead graciously sat and listened. Thank you, Annie. It's hard to believe its been seventeen years since our carpool to Lud's memorial in Spokane.Circumstances aside I really enjoyed that trip.I wanted to send you a card with a letter in it ,but my address book with your info in it accidently got thrown out with the recycling awhile back. I am thinking of you during your time of grief and hope you find some comfort among family and friends. Sometime in the future I would very much like to get together for a visit.You've touched my life more than you know. Take care, Mack Benek
Mack C Benek
Family
July 14, 2021
We read Anne´s obituary with great sadness for her family and friends. Charlie, we´ll never forget the fun we had working with you on remodeling our wood shed. Only a great mom (and dad) could have raised such a great son. And we would bet you are a super family man. Our prayers to all of you during this time of sorrow.
Barb and Jim Hays
Friend
July 13, 2021
Showing 1 - 3 of 3 results