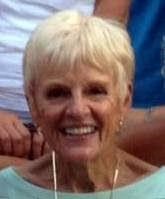 Irma Mooney passed away peacefully on May 13, 2021 at her home in Meridian, Idaho, attended with love by her husband, her two daughters and her dog, Jake. Born Irma Vickerman in Ellensburg, Wash., she was the eldest daughter of Wynn and Catherine Vickerman, strong willed and self- made people who were incredibly proud of their girls. She grew up in Ellensburg, along with sister and best friend Patricia, until she moved away to attend Seattle University. Irma followed her mother into the nursing profession and, after graduation, embarked on a successful career as a registered nurse. She ended her career at the Boeing Company, where she was an occupational health nurse manager.
In 1958, Irma married her college sweetheart and the love of her life, Bob Mooney and they started a family. They raised their three kids in Bellevue, Wash., where Irma was a loving and involved parent who supported all her kid's activities. Their home was always a happy hub, full of friends and family. Holiday celebrations were legendary.
After retirement, Bob and Irma enjoyed boating, golf, gardening, and travel. They spent winters in Palm Desert, Calif., and Nuevo Vallarta, Mexico. Eventually, they relocated to Camano Island where they lived for twenty years until their relocation to Idaho in 2020. At the time of her passing, Irma and Bob had been married almost 63 years and were considered by most of their friends and family as one of the happiest, most loving couples of their acquaintance.
Irma was a beloved wife, sister, mother, and grandmother. She was very involved in the lives of her grandchildren, all of whom loved her dearly. In 2019, her son, Robert M. Mooney predeceased her, a tragedy that she endured with stoicism. She is survived by husband C. Robert (Bob) Mooney, sister Patricia Brown, daughters Karen Mooney and Laura Bates Brocke, son-in-law Todd Brocke, daughter-in-law Nicole Chicoine Mooney and grandchildren, Kate May, Tyler Mooney, Bryce Mooney, Jessica Bates, Sarah Borgnes and Sean Bates, plus her beloved black lab Jake. A Celebration of Life will be held on Camano Island at a later date.
Published by Stanwood Camano News from May 18 to May 25, 2021.
To plant trees in memory, please visit the Sympathy Store.
MEMORIAL EVENTS
To offer your sympathy during this difficult time, you can now have memorial trees planted in a National Forest in memory of your loved one.
MAKE A DONATION
MEMORIES & CONDOLENCES
1 Entry
We were sorry to hear of Irma's passing. Our hearts go out to you Bob.
Mike and Marge
Friend
May 27, 2021
Showing 1 - 1 of 1 results