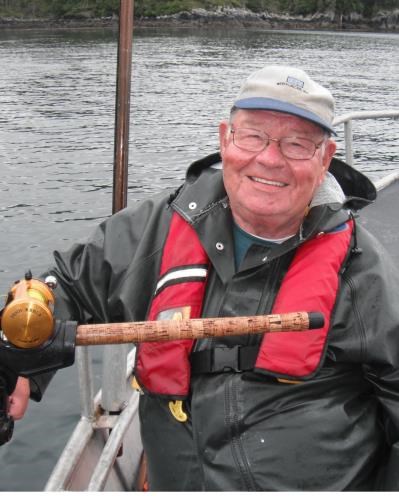 Marty split his time between Seattle, where he was born on April 9, 1934, and Camano Island, where he was raised. Highlights of his teen years were chronicled in the Seattle Post Intelligencer by his father, Clarence, a sportswriter-turned "City-Bred Farmer" columnist. Marty's mother was Cleo Coons.

Marty once listed 34 duties he had as a youth, from farm chores to working summers as a boatman at Camano fishing resorts to logging and, at age 16, spending one summer in a gold mining camp near Fairbanks and as a cook in a forest fire fighting camp. He drove heavy equipment during the construction of the Hood Canal Bridge and other road projects and worked briefly as a commercial fisherman around Neah Bay.

Following his 1952 graduation from Twin City High School in Stanwood, where he lettered in football, Marty attended Central Washington College in Ellensburg for a year before enlisting in the U.S. Marine Corps.

After three years in the military, Marty earned a degree in civil engineering from the University of Washington. He married his wife of 61 years, Ann K. Smith, on Oct. 16, 1959 in West Seattle. He landed his first engineering job in New Jersey, where their twin sons Greg and Brian were born, but then took a position with Boeing. The couple would have three more sons in Seattle over the next 11 years: John, Stephen and Tom.

Marty left Boeing to work at Metro Engineers, a consortium of consulting engineering firms deployed by King County Metro to address the badly polluted Lake Washington and other civic projects. That led to Marty's long career as a principal officer (and eventually president) of the Seattle firm of Kramer, Chin and Mayo (KCM). At KCM Marty had strong leadership roles over the design of several noteworthy projects, including the original sewage treatment plant at West Point in Seattle and later its extensive upgrade, several fish hatcheries and wastewater treatment plants across Washington, Alaska and the United States, municipal sewage systems, lake restoration projects, and stormwater systems. Marty was KCM's project manager for the Seattle Aquarium, which won a national award for its innovative design. In 1974 he became one of the first U.S. citizens to enter China to oversee a prawn hatchery project following the normalization of U.S.-China relations.

Marty was known through his many professional and personal life circles as a troubleshooter, artful negotiator, problem solver and relationship builder. Regarded as one of the region's foremost experts in tunnels and sewer systems, Marty's advice was sought even long after his retirement in 1995. He was a recipient of the Consulting Engineering Council of Washington's Engineer of the Year award. Following his retirement Marty served on the boards of the Seattle

Museum of History and Industry, the Sheldon Jackson College in Sitka, Alaska and the South Seattle Community College Foundation, as well as a dispute resolution board for major public works projects.

More significant to Marty than his professional life was his family and outdoor life.

In the 1960s Marty built a small cabin on Camano Island where the family spent most summer weekends and vacation time. In 1972 Marty won the statewide, summer-long Seattle Sporting Goods fishing derby by catching a 44-pound chinook salmon off Camano, taking home a boat as first prize. Marty helped his sons with their paper routes, became deeply involved in their Boy Scout activities.

Marty was known for his quick wit and humor and was generous with his time (and stories) with his family, many friends and neighbors. After learning to snow ski in his late 40s he co-organized annual ski trips of family and friends to McCall, Idaho.

He and Ann, who died in early January, enjoyed a long and fulfilling retirement. When not traveling to points around the world Marty and Ann spent time with family and friends in their West Seattle and Camano Island homes and volunteered for Ryther and other non-profits. When Ann became infirm, Marty became her primary caregiver for several years.

Besides his sons and their spouses (Nancy, Dee, Ellen and Suzy), Marty is survived by his brother Mike in Spokane, 10 grandchildren and three great grandchildren, all of whom live in the greater Puget Sound region.

Arrangements are by the Emmick Family Funeral Home in West Seattle. A limited capacity memorial service for Marty will be held at 11 a.m. on Aug. 28 at the Fauntleroy United Church of Christ in West Seattle. The family is arranging for additional seating and online viewing at the Hall at Fauntleroy across the street, followed by a "Party for Marty" there. The service will also stream online - please send an email to [email protected] for details. The family suggests donations in his name to Seattle Ryther or to the Stanwood-Camano Area Foundation, which has posted a special scholarship link at the top of its web page at https://s-caf.org/.
Published by Stanwood Camano News from Jul. 27 to Jul. 28, 2021.
To plant trees in memory, please visit the Sympathy Store.
MEMORIAL EVENTS
Aug
28
Memorial service
11:00a.m.
Fauntleroy Church UCC
9140 California Ave SW, Seattle, WA
Funeral services provided by:
Emmick Family Funeral Services
MAKE A DONATION
MEMORIES & CONDOLENCES
0 Entries
Be the first to post a memory or condolences.