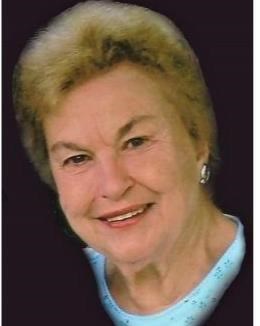 Mary's early years were spent in La Crosse, graduating with honors from Aquinas High School. After high school, Mary was employed by the U.S. Department of Agriculture, working there until she married her high school sweetheart, James Lewinski, on July 9, 1955.

Mary and Jim moved to Stanwood, WA in the fall of 1959, where Jim took a teaching position at Stanwood High School. The Stanwood/Camano area become their home, where they raised their 3 boys: Brian, Mark, and Bruce.

After their boys matured, Mary went to work at the First National Bank of Stanwood, now the Bank of America, retiring after 17 years.

Both, Mary and Jim, retired in 1988 giving them time for traveling, sightseeing, cruising, gambling, fishing, visiting their children, grandchildren, and enjoying friends. Mary's favorite hobby was Lapidary work. She enjoyed searching for stones, cutting, polishing, and displaying them in beautiful containers. Many of these creations were gifts for family and friends.

Mary's health began to decline from constant pain due to nerve damage. That pain and the onset of Alzheimer's resulted in her moving to Josephine Caring Community in 2015. Thanks to the loving care received there, Mary's last years were comfortable and pain free.

This beautiful woman, Mary, was the most loving, loyal, trusting, caring, considerate, thoughtful, loyal companion a husband, child, grandchild, or friend could ever have. Her loving ways and thoughtfulness will be missed by all who knew her.

At Mary's request, there will be no funeral, but a private family memorial mass will be held at a later date. Memorials may be made to Josephine Caring Community in Stanwood.

Arrangements under the direction of Gilbertson Funeral Home, Stanwood, WA.
Published by Stanwood Camano News from Jun. 15 to Jun. 16, 2021.
To plant trees in memory, please visit our Sympathy Store.
MEMORIAL EVENTS
To offer your sympathy during this difficult time, you can now have memorial trees planted in a National Forest in memory of your loved one.
Funeral services provided by:
Gilbertson Funeral Home and Cremation Service - Stanwood
MAKE A DONATION
MEMORIES & CONDOLENCES
0 Entries
Be the first to post a memory or condolences.