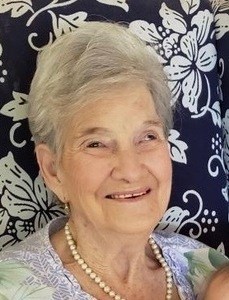 Dorothy Genoese Quetel (nee Brand), 93. Ginny to all her friends, passed away peacefully on September 4, 2021. For the last 6 months, she was a resident of Autumn Care Nursing facility in Marshville, NC. Prior to that, she lives in Monroe with her daughter and son-in-law, Joan and Andy Cook.

Ginny was born on August 27, 1928 in Hartsville, SC to Janie MayBelle and Jessie DeLeslie Brand. She was one of eight children and was the last surviving sibling.

In 1944, she met and married the love of her life, Julian Peter Quetel. They were married 52 years before Julian passed away in 1998. In 1951, their first daughter was borne, Jeanne Renee. In 1956, their second daughter was born, Joan Marie.

In 1960, Julian moved the family to St. Thomas, USVI where they lived until 1976. During this time, she worked at The Continental, Chi-Chi (Place Dendome) and lastly, First Pennsylvania Bank before relocating to Gastonia, NC.

Ginny was a fun loving, caring, sweet soul. She loved her family, especially her two children and all of her grandchildren, and considered them her greatest accomplishment in life. She enjoyed reading, camping at Ocean Lakes in Myrtle Beach, spending time on the beach and shopping. She enjoyed visiting family and friends so much that the family often joked that her middle name was "GO".

In lieu of flowers, memorials may be made to Ginny's favorite charity, St. Jude Children's Research Hospital.

Condolence messages may be sent online at www.mcleanfuneral.com.