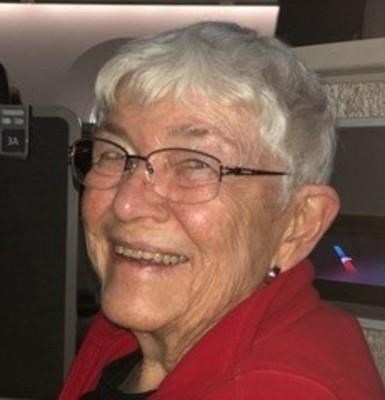 St. John, US Virgin Island - On April 10, 2020, Carol McGee Stiles died at the age of 84 in her home in Fish Bay, St. John, U.S. Virgin Islands, as a result of Chronic Obstructive Pulmonary Disease. Barely four months had passed since the death of her husband, Dr. Clifford Stiles, in the same house. She is survived by her children, Colleen, Kevin, T.J., and Karen Stiles, who gathered with her on St. John in late February for Cliff's memorial service. Few people have ever been more certain of who they were. Carol possessed a depth of character that made her a mooring for the many people who knew and loved her. Wise, passionate, practical, caring, she combined an immense strength of will with love, faith, and a willingness to dig in and work. She served as a pillar of everything to which she belonged, whether family, community, or church. Born on December 10, 1935, in Loves Park, Illinois, Carol was the oldest of the four children of Harold and Marion McGee. Her childhood home was on the Rock River, and she grew up swimming and boating in its waters. She would always remember the shortages and rationing of the Great Depression and World War II; decades later she would demonstrate how she had peeled the foil off the wax paper of gum wrappers in order to save it for the war effort. Her father, a gifted machine-tool engineer, was not allowed to enlist. Instead he designed machines to tool parts for torpedoes, among other things, running one of them in the basement at home to boost production. After graduating from Harlem High School in 1953, Carol followed her mother's example and studied nursing at Wesley Memorial Hospital in Chicago. She graduated in 1956. On a Lake Michigan beach, she met a young doctor named Clifford Stiles, a graduate of Northwestern Medical School. They married on July 12, 1958, and moved to Minneapolis to join the practice of an old family friend—who turned out to be a terrible bigot. The couple moved to Foley, a small town seventy miles north of Minneapolis in rural Benton County. Cliff's new partner died unexpectedly, but they remained and raised a family in a house a mile south of Foley, on a lot carved out of a cornfield. Carol and Cliff dedicated themselves to a full partnership in everything. In addition to rearing four children, they took an active part in the community, particularly in the First Presbyterian Church of Foley. In 1968, a trip to Russia convinced them of the transformative power of travel. They organized a youth group, the Young United Presbyterians, and ran perennial fundraisers—including a rummage sale, a hot dog stand during the annual Foley Fun Days festival, and a huge Christmas wreath sale—to pay for youth-hostel excursions to Europe, which Carol and Cliff jointly led. The Presbyterian Church U.S.A. emerged as Carol's particular passion. A clergyman once insisted to her that women did not belong in ecclesiastical office; she set out to prove him wrong. She served as an elder of the congregation's session, a commissioner to the Synod of Lakes and Prairies, and as moderator of the Presbytery of Minnesota Valleys. She traveled to Guatemala to work with church members and victims of oppression, wrote and graded ordination examinations, fought for the ordination of women and gay and lesbian clergy, and played a particularly active role in the ecumenical Collegeville Institute. She joined the Institute's board of directors in 1994, and served as its chair. In all of this, she displayed her bedrock belief in women's equality, her devotion to the Book of Order (the Presbyterian Church's governing document), and her deep ecumenical spirit.

Carol was an active and independent member of the Republican Party. She liked to quote Rep. Walter Judd: "I am conservative so that I will have something left with which to be liberal." That combination of prudence and humanitarian spirit marked her outlook. As in the church, she fought for the equal role of women in politics and government. Utterly down to earth, she liked to poke fun at pretension. She and Cliff hosted a dinner early in their marriage for a gubernatorial candidate from a wealthy family with a household name. They served spaghetti to the assembled notables and staffers, and Carol piled an absurdly huge portion on the candidate's plate. He dutifully ate the entire serving, long after everyone else had finished. As he slurped down the last noodle, a sigh of relief swept the room. Cliff leaped up. "Would you like some more?" The candidate hastily declined. Carol shrieked, "You didn't like it!" The assembly gasped, and then she and Cliff roared with laughter. For much of her life, she battled against racism. She not only taught egalitarian values, she and Cliff took their children out of Foley to meet and respect, face to face, people who did not look like them. In the 1970s, they bought a lot on St. John, U.S. Virgin Islands, built a small house, and began to spend half of each year there after Cliff retired. "We never forget that we are guests," she said, of the "ancestral families," the West Indian descendants of the enslaved. They became active in the interracial Bethany Moravian Church, and cherished the island's community. In 1984, she went into treatment for alcoholism. She became a dedicated member of Alcoholics Anonymous, and a faithful sponsor. Recovery transformed her relationships and outlook on life; it defined everything she did. It gave her strength to bear up Cliff during his difficult last years, beset by health problems. Carol was a human being. She had a temper. She cried when watching movies that were in the least bit sentimental. She was tough-minded, able to do difficult things. She read voraciously, from literary novels to romances. She gave careful consideration to all things; she loved to get out a map and highlight a route. She always knew precisely how she wanted everything done. Woe to those who hung toilet paper so that it rolled toward the wall, or used a double negative in her presence! Yet her good sense was profound, her planning precise. Her preferred way was, in fact, almost always the best. Most important, Carol continued to grow throughout her life, to become more accepting, generous, loving, and indeed better as a person. A woman of immense love, a listener, and a thoughtful friend, Carol drew the affection and admiration of all who knew her. She was always honest; she possessed tact, but no deceit. In difficult times she liked to say, "All you can do is all you can do, and all you can do is enough." She did so much, so well, and it will reverberate long after her passing. Due to the pandemic, memorial services will be held at a later date at the First Presbyterian Church of Foley and Bethany Moravian Church on St. John. The family invites donations in her memory to the Carol and Clifford D. Stiles, M.D., Scholarship Fund, Foley Area Community Foundation, 101 7th Avenue S., Suite 100, St. Cloud, MN 56301. Service with Dignity provided by the Foley Funeral Home.

Published by St. Cloud Times from Apr. 16 to Apr. 19, 2020.
To plant trees in memory, please visit the Sympathy Store.
MEMORIAL EVENTS
To offer your sympathy during this difficult time, you can now have memorial trees planted in a National Forest in memory of your loved one.
Funeral services provided by:
Foley Funeral Home
MAKE A DONATION
MEMORIES & CONDOLENCES
Sponsored by Foley Funeral Home.
7 Entries
We are honored to have known Cliff and Carol We will miss them.
Bill and Joan Gross
Neighbor
May 5, 2020
My name is Betty Meakins and I am the sister of Joan Bauman - I visited Foley frequently many years ago before moving to BC Canada and met Carol, enjoying morning coffee with her, Joan and Sheila Garceau. My fondest memory of Carol is when she wrote me a condolence letter after my mother Janet Parr passed and it touched my heart - I still have it to this day as it brought me a lot of comfort. My husband Barry did meet Carol and Cliff a few times and joins me in sending our condolences on the loss of Carol and also of Cliff.

Betty Meakins
April 23, 2020
she drove me as a volunteer for Foley area CARE. she was funny and informative and made me wish she would write a column for the paper so I could hear more from her. sorry to hear of her loss.
MARLYS KRAUEL-VANDEREYK
April 19, 2020
We welcome all memories of our parents. The four of us kids, and Mom's surviving siblings Heather Brown and Bonnie Matty, are grieving deeply. Your words comfort us.
Colleen Stiles
April 18, 2020
Carol and Cliff, a highly talented dynamic duo of service and caring. You are so warm and gracious. Thanks for being bright lights in our lives and world. Your deaths are a great loss for family and friends.
Court and Linda Smith
April 17, 2020
Showing 1 - 7 of 7 results