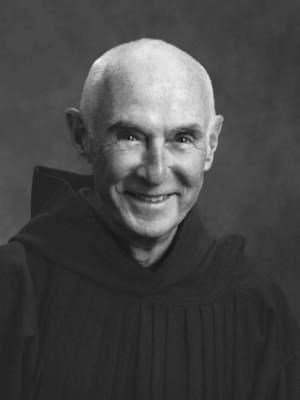 Robert Anthony McDonald was born the youngest of five sons to George Thomas and Nora Madeline (Connley) McDonald in Minneapolis, Minnesota, on December 23, 1928. Robert completed his early education in Minneapolis, attending Whitney and Prescott elementary schools. Robert attended Edison and De LaSalle high schools, graduating from the latter in 1946. He enrolled in the University of Minnesota, finishing his associate of arts degree in 1948.

Thereafter he worked at the U.S. Army Security Agency until 1950.

After his work in the army, he enrolled in Saint John's University where he graduated with a B.A. in philosophy in 1956. In this same year, he also made his first profession as a monk of Saint John's Abbey, taking the name of Finian. Upon completing priesthood studies at Saint John's, he was ordained a priest in 1962. Continuing his education at Boston College, he was awarded an M. Ed. in psychology (1971), receiving further training in psychiatric counseling at Georgetown University in Washington, DC.

Father Finian began his active ministry as pastoral associate at Holy Family Mission in Cloquet, Minnesota, in 1962-63, but most of his ministerial assignments thereafter were at Saint John's University.

In his later years, various allegations of sexual misconduct subjected Finian to restrictions and therapy.  Father Finian died on February 9 in a hospice care facility.

He is survived by his nephew, Robert McDonald and niece, Mary Ann McDonald, and the community at Saint John's Abbey. The monks, family, and friends will celebrate the Mass of Christian Burial for Father Finian on February 17 at 3 pm in Saint John's Abbey and University Church with interment in Saint John's Cemetery following the service.