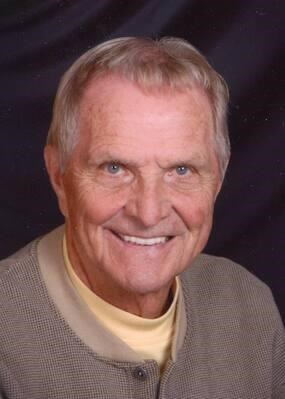 Lew was born on November 23, 1932 in Dunn County, WI to Louana and Ralph Johnson. In his youth he lived in Montevideo, MN, Van Nuys, CA and Moorhead, MN where he graduated from High School. He received both his bachelor's and master's degrees in education from Moorhead State. In 1955, he married Lila J. Hanson at Bethany Lutheran Church in Pennington County, MN.

Lew began his teaching career in Thief River Falls, MN. His children Lon and Lori were born there. In addition to teaching, he coached many sports at the elementary level and was active in the JayCees. Lew continued his career in education in the St. Cloud public schools beginning in 1959 at Garfield Elementary. He served as school principal at Central, Madison, Wilson, Westwood, Jefferson, and Lincoln elementary schools before retiring in 1989. While working at District 742 he was recognized for his work with the PTA and Community Education.

After retiring he enjoyed spending time with his family (especially his grandchildren), playing bridge and golfing at Little Crow in Spicer, MN and Sunland Village in Mesa, AZ. Even before retiring Lew and Lila enjoyed traveling worldwide. Since they liked riverboat excursions they spent time on most of the rivers around the world. Lew accomplished his goal of traveling to all the continents. Two weeks after 9/11 they toured Egypt and saw the sights along the Nile (against their children's advice).

During the pandemic he spent his time reading, watching sports on television (especially the golf channel) and telling his wife what to do.

He was proceeded in death by his parents, sister Alpha Myers and brother Lee Johnson.

Published by St. Cloud Times from Jul. 7 to Jul. 11, 2021.
To plant trees in memory, please visit the Sympathy Store.
MEMORIAL EVENTS
Jul
16
Memorial service
11:00a.m.
Bethlehem Lutheran Church
St. Cloud, MN
Funeral services provided by:
Benson Funeral Home
MAKE A DONATION
MEMORIES & CONDOLENCES
Sponsored by Benson Funeral Home.
1 Entry
Mr. Lew Johnson was a very caring and dedicated principal when I was at Madison .I was blessed to have him in my first years of teaching. God will be with you and help you through his loss. My prayers will be with your family.
Louise Lenzmeier
School
July 12, 2021
Showing 1 - 1 of 1 results