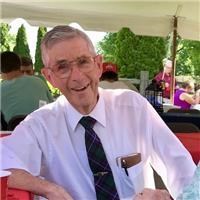 BORN
1929
DIED
2021
On November 17, 2021, after a sudden illness, Clark Hunter of Greenwich entered his eternal home in heaven exactly one year to the day after his beloved wife, Bonnie, was also called home.
Born April 29, 1929, Clark grew up on a small farm in Greenwich, Ohio. He graduated from Greenwich High School in 1947, where he would later serve as the last school board president for the Greenwich Schools. He served in the U.S. Army from 1947-1948 and then returned home to help his father and brother on the farm. He married Bonnie (Sutherland) on November 23, 1951, and together they embarked on a long life of work and service to any and all in need. For many years, they played in a dance band together, Clark being the enthusiastic drummer. His work as an insurance investigator for Retail Credit Company (Norwalk) changed direction when he was appointed to the office of Huron County Clerk of Courts in 1970. Following that appointment, he was elected five times and retired after a successful career in 1992, having implemented many positive changes in the office during that time.
The many ways Clark contributed to his church and community cannot be recounted in total, but some of them follow. Clark helped start the Tri-Community Ambulance Service and served for a time as an EMT. He was very active with the American Red Cross and was deployed to a variety of cities around the country to help in times of crisis. Habitat for Humanity, Greenwich Area Historical Society, several veterans organizations, Grange, and Towne and Country Players are just a small representation of the places and people Clark served. He was a lifelong member of The Ripley Church and served in many capacities during those years, always with a generous, servant heart. He was a servant to the end, volunteering as an usher at a big band concert on the very day before he became ill.
Clark was preceded in death by his wife of 69 years, Bonnie, and by his brother, Gerald, and sister, Elaine (Stauffer). He is survived by his four children: Denise (Randy) Richard, Diane (Jim) Sheets, Angie Hunter, all of Greenwich, and Jim (Karen) Hunter, of Cincinnati. Ten grandchildren and 18 great grandchildren (with two more to arrive soon!) complete Clark's family legacy.
At Clark's request, his body was donated to The Ohio State University Medical School. A memorial service will be held on Saturday, January 8, 2022, at The Ripley Church, 3:00 p.m. In lieu of flowers, please send any memorial contributions to: American Red Cross or a mission agency of your choice.
Published by Willard Times Junction on Nov. 25, 2021.
To plant trees in memory, please visit the Sympathy Store.
MEMORIAL EVENTS
To offer your sympathy during this difficult time, you can now have memorial trees planted in a National Forest in memory of your loved one.
MAKE A DONATION
Please consider a donation as requested by the family.
MEMORIES & CONDOLENCES
1 Entry
I'm sure I speak for all of the members of the Greenwich Ohio Area Historical Society. Clark will be irreplaceable for us , as he was a wealth of information and contacts to get things done for our organization. To the family of Clark I'm really sorry for your loss and I will miss the conversation and memories he had of people he knew and stories of family and friends.
Charles "Chuck" Magill
Friend
November 24, 2021
Showing 1 - 1 of 1 results