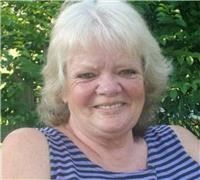 Born June 8, 1953 in Shelby to George and Cora (Hicks) Stidam. Martie has been a Shelby resident for the majority of her life. She was employed as a waitress at Ryan's, Golden Corral, and Olive Garden. Martie had also worked as an aid at Crestwood Care Center.

She was a member of the Shelby Church of God. Her hobbies included collecting zebra, cheetah, and other animal print items. Martie enjoyed painting crafts with her sister and spending time with her family. She was a selfless person and always put others first. A Christian woman, she also liked reading her Bible and attending Bible studies.

In addition to her parents, she was preceded in death by her son Michael Mosley; two brothers Kenneth and William Stidam; and two sisters Eileen Cowdery and Betty Jean Reed.

In lieu of flowers memorial contributions may be made to the family to help off set final expenses.

Online condolences may be made at www.barkdullfuneralhome.com.
Published by Shelby Daily Globe from Nov. 26 to Nov. 27, 2021.
To plant trees in memory, please visit the Sympathy Store.
MEMORIAL EVENTS
To offer your sympathy during this difficult time, you can now have memorial trees planted in a National Forest in memory of your loved one.
Funeral services provided by:
Barkdull Funeral Home
MAKE A DONATION
MEMORIES & CONDOLENCES
Sponsored by Barkdull Funeral Home.
0 Entries
Be the first to post a memory or condolences.