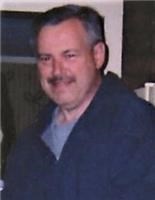 Terry was a Cleveland sports fan, and he was a hands-on man including woodworking and doing yard work.

In addition to his parents, Terry was preceded in death by his brother, Stanley Hall.

His family will not be holding any public services for Terry but encourage friends to remember and honor Terry in their own way. Online condolences may be expressed by visiting www.eastmanfuneralhome.com.
Published by New London Record from Sep. 24 to Sep. 29, 2021.
To plant trees in memory, please visit the Sympathy Store.
MEMORIAL EVENTS
To offer your sympathy during this difficult time, you can now have memorial trees planted in a National Forest in memory of your loved one.
Funeral services provided by:
Eastman Funeral Home - New London
MAKE A DONATION
MEMORIES & CONDOLENCES
Sponsored by Eastman Funeral Home - New London.
0 Entries
Be the first to post a memory or condolences.