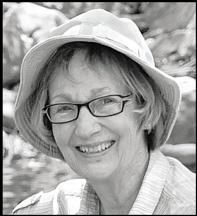 Audrey June Wass died peacefully on March 1, 2017 with her husband and sister at her side. She had been ill for several months from myelodysplastic syndrome and complications.

Audrey led an active life, running moguls and dodging trees on ski slopes from the Cascades and Rockies to the Alps. Her adventures included hiking cross country in the Cascades and trekking in Nepal and Peru. She traveled widely from Antarctica to India, and led hiking trips in Turkey. At home, she was an active gardener, cross country skier, climber and hiker. She enjoyed duplicate bridge for both its competitive challenges and social aspects.

Born April 17, 1935, Audrey grew up in Southwest Harbor, Maine. She attended Bates College and later moved to Portland, Oregon, then Seattle where she spent almost 40 years. She worked as an electron microscopist at the Oregon Regional Primate Research Center and University of Washington pathology department.

Audrey is survived by her husband Steve, sisters Pat and Janet and brothers Leighton and Stanley. A memorial gathering will be held later in the spring.

Guest Book at www.Legacy.com
To plant trees in memory, please visit our Sympathy Store.
Published by The Seattle Times from Mar. 7 to Mar. 8, 2017.
MEMORIAL EVENTS
No memorial events are currently scheduled.
To offer your sympathy during this difficult time, you can now have memorial trees planted in a National Forest in memory of your loved one.
MAKE A DONATION
MEMORIES & CONDOLENCES
Sponsored by The Family.
8 Entries
We will miss herself along by talents, gifts, and from years on conversations of foreign places ! Her sturdy attitudes,or language practice and to add lots of interests generally which were shared friends memories.
JAB and ENV the family,Mother+daughter
June 5, 2017
My condolences to to Steve, Family members and the vast amount of friends Audrey's life touched while enriching.
I was privileged to work with her during our careers at UWMC where she Supervised the Electron Microscopy Laboratory of our Anatomic Pathology Department. Audrey was a friend who shared her artistic ability for handmade Christmas cards. Several adorn my Tree each year and will be an annual reminder of what a unique person she was with so many varied interests she shared. Her Truffles definitely will be missed wishing I had paid better attention during the lesson she provided me in her (well mostly Steve's) kitchen. Audrey's front yard landscaping welcomed when visiting, as did Steve's interesting vegetables & Herbs. Horseradish stands out. :) Audrey had quite an impact on my life as she had on many others.
Don Hammer
April 21, 2017
My condolences to Steve. I had the pleasure of working on a daily basis with Audrey from the time I arrived at the University of Washington in 1986 until her retirement as supervisor of the Electron Microscopy lab. Audrey was cheerful, funny, dedicated and, was she ever skilled! I have missed her presence in the lab from the day she retired. Listening to her descriptions of all the places she traveled to for skiing has always inspired me to strive to be a better skier and follow in her tracks.
I will miss Audrey greatly- a good person, a great chocolatier, and a wonderful friend and colleague.

Charlie Alpers
March 12, 2017
I have great memories of Audrey from numerous ski trips to Big Sky and elsewhere. We especially enjoyed her cooking and conversation about travel at your house.

Bill & Barbara Dunbar
March 11, 2017
So many of our lives have been brightened by Audrey's energy. So many of our worlds have been broadened and by her curiosity. Her quiet impact on many lives is her legacy to us all, and to the world.
Charlotte Green
March 10, 2017
Our condolences to the family and large circle of friends who have all been diminished by the loss of this remarkable woman.
Marilyn and I have been pleased to know Audrey and Steve for several decades as fellow Great Books participants.
Audrey was very soft-spoken in our group discussions, but she always had insightful comments to make which brought us closer to an in-depth understanding of the reading at hand, whether it was Shakespeare or John Stuart Mill. She and Steve hosted a gathering in her lovely yard for the Great Books folks every summer with food and wine, book exchanges and great conversations.
We miss her already.
James&Marilyn Stark
March 9, 2017
My condolences Steve. Audrey was a good ski buddy, good memories of trips including the one where Neil got us locked in behind the Alpental gate. Enjoyed our talks about Turkey and our struggles to learn the language. I think I still have one of her Turkish books
Carol Iversen Terzi
Carol Terzi
March 8, 2017
Audrey was a wonderful friend and a great hiking and skiing companion. Her smile and wit will be missed.
Nancy Waligory
March 8, 2017
Showing 1 - 8 of 8 results