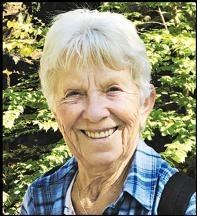 Bonnie passed away on August 24, 2020. She was born in Minnesota on August 3, 1941 to Wilfred (Bill) and Helen Johnston. She met her husband Terry O'Neal cruising the Renton Loop in 1956 and on September 25, 1959, they married and had nearly 61 years together. Bonnie worked at Boeing until her retirement.

Bonnie had a kind, generous and loving nature and is how she and Terry raised their four daughters, Diane and Donna O'Neal, Debbie (Wesley) Tabor and Darlene (Joe) Wilson. She is grandmother to Alexis and Kaden Dobson and Lauren and Adam Tabor. Bonnie traveled the United States and the world from Hong Kong to Africa. Her snickerdoodle cookies are legendary and her grandchildren consider her grilled cheese sandwiches the best in the world.

Sign Bonnie's online Guest Book at www.Legacy.com.
Published by The Seattle Times from Aug. 26 to Aug. 27, 2020.
To plant trees in memory, please visit the Sympathy Store.
MEMORIAL EVENTS
To offer your sympathy during this difficult time, you can now have memorial trees planted in a National Forest in memory of your loved one.
MAKE A DONATION
MEMORIES & CONDOLENCES
Sponsored by The Family.
8 Entries
Dear Family, we're so sorry for your loss. We knew Bonnie from the 'Y' and will miss her smiling presence. She was like a ray of sunshine and the world was a better place while she was here.
Fred and Willa
September 1, 2020
Had so much fun with Bonnie many years ago when we were neighbors! Sorry to hear of her passing but know she is looking down on us from above. God bless all of you!
Mary Hajny
Friend
September 1, 2020
Aunt Bonnie was an awesome aunt and Godmother. She will be missed but my memories of her will always make me smile and feel loved.
Michael Johnston
Family
August 28, 2020
Sorry for your loss.
Scott McMahill
Friend
August 28, 2020
We loved our wonderful sister Bonnie and will miss her very much. She is and was very special. We had many wonderful times and trips with her and Terry. Love her always and until we meet again will miss her.
Leonard & Linda Johnston
Family
August 27, 2020
Bonnie was a very special person. We loved meeting the Johnston’s and ONeil’s at Laughlin for many years. She will be missed. Our thoughts and prayers are with all of you. God Bless.
Gordon and Sharon Aas
Family
August 27, 2020
Dear Terry
Just wanted you to know Carolyn and I are thinking of you during this sad time. Prayers fo Bonnie and all the family. God Bless
Carolyn Bob
Friend
August 27, 2020
Aunt Bonnie will be missed greatly by me and my family. She was always in my corner and I knew no matter what she would be there for me. Love you, miss you and you will always be in my heart.
mark johnston
Family
August 26, 2020
Showing 1 - 8 of 8 results