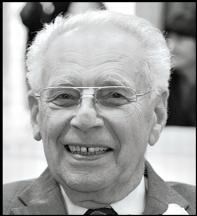 Branko Grünbaum, a professor emeritus of mathematics at the University of Washington who was known worldwide in his field, died September 14, 2018 at age 88. He was born in Osijek, Croatia (at the time part of Yugoslavia) in 1929, and was married for 61 years to his high-school sweetheart, Zdenka (Bienenstock) Grünbaum. Having survived the Holocaust in Yugoslavia, they emigrated to Israel in 1949.

Branko was a devoted and involved father and grandfather, a prolific scholar with wide-ranging interests, fluent in five languages, and a lover of the outdoors and especially the Pacific Northwest mountains and coast. He earned MSc and PhD degrees at Hebrew University in Jerusalem, along the way serving in the Israeli Air Force as an analyst. After working at the Institute for Advanced Studies in Princeton, Hebrew University and Michigan State U., he became a full professor at the University of Washington in Seattle in 1966, where he researched and taught for the next 35 years.

Zdenka preceded him in death in 2015. They are survived by their sons: Rami, with wife Galya and their daughters, Mara and Sasha (and her wife Roxana); and Danny, with wife Martha and their sons Maks and Sam.

A memorial gathering in their honor will be held Saturday, Sept. 29, at 1:00 p.m, at Aljoya Thornton Creek, where they had an apartment since 2011. 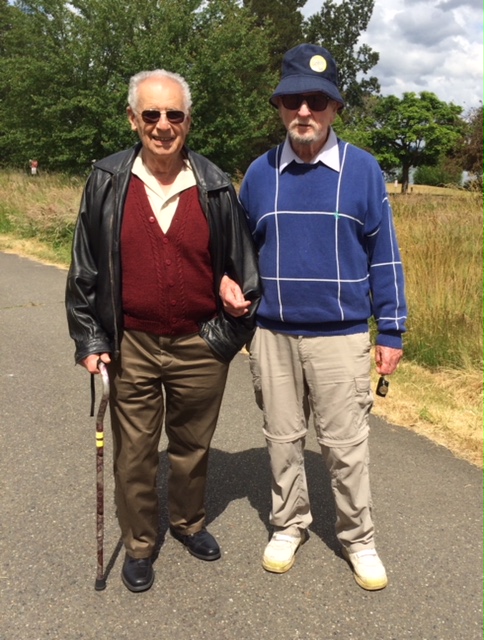 This was our last trip together to Magnuson Park. We miss our meetings, Ethiopian meals together and his wits and sense of humor.
Sharon & Moshe
Moshe Rosenfeld
Student
September 15, 2020
Branko was my teacher, mentor, mathematical father and close friend. Our close relationship lasted only 55 years. Sharon and I enjoyed our many visits with Zdenka and Branko, we were fascinated by their life stories, shared experiences, wits and sense of humor. After Zdenka passed away in 2015, we continued visiting Branko enjoying walks together, his favorite Ethiopian food and his courageous dealing with end-of-life process. One day in April 2018, when I came to visit Branko, I asked him ma schlomcha? (how are you in Hebrew) he put his arm around my shoulder, smiled, had a twinkle in his eye and said gossesim (dying in Hebrew).
Zdenka and Branko's departure left a big hole in our life.
Moshe Rosenfeld
February 3, 2019 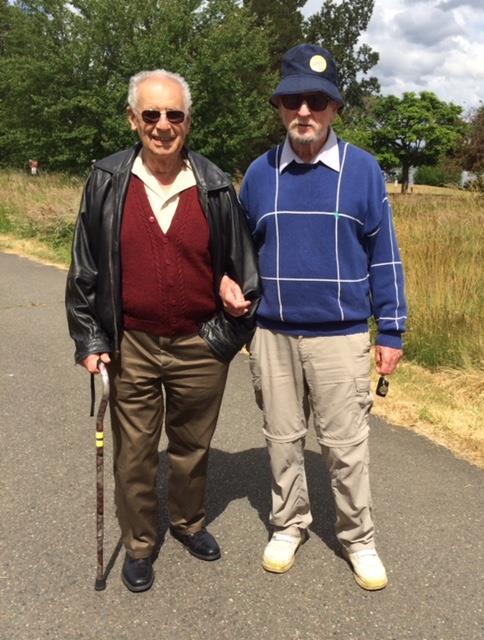 Moshe Rosenfeld
February 3, 2019
Branko Grünbaum was one of my mathematical heroes. When I was in college I fell in love with his book "Tilings and Patterns" (with Shephard), which is still, 30 years later, my favorite math book. He was very helpful and generous with his time in answering the naive questions I asked him in an email when I was applying to graduate schools, and later when I occasionally emailed him as a colleague. And I am still telling my graduate students to read his Regular Polytopes book...
Nathan Reading
October 4, 2018
I'm very sorry to hear that Branko Grünbaum is no longer with us. Last year I still had a fruitful and enjoyable mail discussion with him about a mathematical question. I will miss both his humour and his brilliance.


With thankfulness,
Bernhard Klaassen
October 2, 2018
Branko Grunbaum has been an inspiration to me. I met Branko & Vic as a student at the UW in the late 1980s. Branko was brilliant, internationally renowned, so prolific -- and yet so humble and approachable. He always put a lot of effort into teaching and into his presentations. He cheerfully led us students on excursions through high-dimensions, sharing their beauty and their illusions. Branko shared his love of combinatorics by making it accessible.

Two other indelible memories of Branko leading by example. Branko used technology in his research, both for exploration and for visualization. And he made extraordinary efforts to continue participating even though his hearing was failing him.

Forever grateful to you and to Vic.
Fred B. Holt
October 1, 2018
I've long admired both Zdenka and Branko Grunbaum from the stories I've heard about their lives and their relationships with their children and grandchildren. May their memory be a blessing.

With love to Rami, Galya, Mara, Sasha, and Roxane.

Beth, Mark, and Jess
September 29, 2018
I remember Branko as a kind and brilliant soul. He came to Victoria as the external examiner on three of my student's Master's and PhD. theses; theses that were about an area of enquiry that he initiated, the mathematical study of Venn diagrams. He was so accommodating! For the last defense he was recovering from surgery and had to check with doctors about the potentially bumpy ferry ride and was chugging some sort of liquid food instead of having proper meals. And he took with him an audio system that allowed him to hear and respond to questions at the defense, in spite of being somewhat deaf. We were all touched by his amazing spirit.
Frank Ruskey
September 27, 2018
When my father Victor Klee died I had an overwhelming amount of my father's mathematical materials to sort through and Branko was invaluable in that process. His patience, kindness, knowledge, and generosity in helping me was much appreciated.
Heidi Klee
September 26, 2018
Additional causes supporting their values and experiences are the Anne Hof Blinks Fellowship in Marine Biology and the IAS Access and Opportunity Fund, both of which support students from backgrounds under-represented in STEM fields, including Mathematical Thinking and Visualization. Such donations are also possible via uw.edu/make-a-gift.