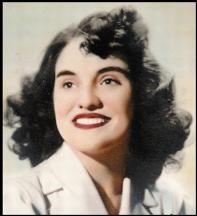 passed away at her home in Seattle on Christmas Eve, 2015, after 90 years on this earth. Catherine was the beloved mother of 9 children, the cherished grandmother to 4 grandchildren, and a person who gave unconditional love and support to many people throughout her life.

Catherine was born in the late summer of 1925, on September 9, in Logansport, Indiana, the only daughter of Frank Burgess and Lillian Burgess. She was raised on an Indiana farm before moving to Chicago as a teenager, a city she always loved. Catherine attended high school at Loretto Academy on the southeast side of Chicago, where she was taught a variety of subjects by dedicated Roman Catholic nuns, including classes in poetry, composition, math and short hand. She also learned the most beautiful handwriting one can imagine. She used those skills after graduation to work her way up at the beautiful old Stevens Hotel on Grant Park in Chicago. It was here that she met her future husband and hotel manager Steve J. Day. Catherine and Steve lived and worked at several grand hotels in Chicago before entering into business with Catherine's mother Lillian and adoptive father Jack Bell, purchasing the rights to the Hole-in-One Donuts franchise for the Northwest and Alaska.

Moving to Seattle in 1954 with the first 4 of their children, the family opened their first donut shop in Lake City. Catherine and Steve soon bought a house in the Cedar Park neighborhood. They were also founding members of St. Matthew Catholic Church and school, where their children all started in their education. By 1962, they had opened several more donut shops and built a new house in Cedar Park, a home where Catherine would live for the rest of her life. Also by 1962 they had 5 more children, for a total of 9 kids, all of whom would pack into the white Catalina station wagon with their mom, with lots of stares (and counting) by other drivers.

Catherine thought nothing of organizing spur of the moment trips to Ocean Shores with all 9 kids and friends (usually at least 1 or 2 of the Walker girls). She loved the ocean and in the 1970's opened a donut shop with her mother Lillian at Ocean Shores. She retired from that work back at her large home in Seattle, where she never turned away a stray cat or dog needing help or a home, and never said no to a friend or relative in need of a comforting place to stay.

Catherine is survived by her children Elizabeth Day (and husband Christopher Stocking) of London, England, Suzan Day of Seattle, Patrice Day of Seattle, Cynthia Day of Redondo Beach, CA, Sandrina Day of Seattle, Stephen Day (and wife Nancy Josephson and grandchildren Anna Josephson-Day and Audrey Josephson-Day) of Seattle, Stefany Day of Seattle and Andrea Huber (and husband Kevin Huber and grandchildren Mia Huber and Nikolai Huber) of Seattle. She is also survived by her sister Sally Paul of Lynwood, WA, her niece Terri Ann Kilborn of Wasilla, AK, her nephews Jimmy Nelson and Mikey Nelson of Lake Forest Park, WA, her nephews Mike Day of Minneapolis, MN and George Day of Brooklyn Center, MN, and cousins Dee Dee Klotz of Florida, Vicki Hopkins of Florida and Michelle Becker of Indiana. She is predeceased by her husband Steve and her daughter Kathleen Day.

Catherine's funeral mass will be celebrated Saturday January 2, 2016 at 1:30 pm at St. Matthew Catholic Church, 1240 NE 127th St. in Seattle. A reception will follow in the social hall.

A celebration of life will be held on Monday January 4, 2016, with viewing beginning at 10:00 am and a memorial service at noon, followed by graveside service and reception at Acacia Memorial Park and Funeral Home, 14951 Bothell Way NE, Lake Forest Park, WA. In lieu of flowers donations should be sent to the ASPCA or the Union Gospel Mission of Seattle. You may sign Catherine's online guestbook at www.acaciafuneralhome.com.
Published by The Seattle Times from Dec. 29 to Dec. 30, 2015.
To plant trees in memory, please visit the Sympathy Store.
MEMORIAL EVENTS
Jan
2
Funeral Mass
1:30p.m.
St. Matthew Catholic Church
1240 NE 127th St., Seattle, WA
Jan
4
Viewing
10:00a.m.
Acacia Memorial Park & Funeral Home
14951 Bothell Way NE, Seattle, WA
Jan
4
Memorial service
12:00p.m.
Acacia Memorial Park & Funeral Home
14951 Bothell Way NE, Seattle, WA
Funeral services provided by:
Acacia Memorial Park & Funeral Home
MAKE A DONATION
MEMORIES & CONDOLENCES
Sponsored by The Family.
7 Entries
Rest in peace Aunt Kay ♡ Love always, your Indiana family ♥
Dee Dee Klotz
January 22, 2016
I have very fond memories of meeting Mrs Day when Chris and Zebby got married in Seattle. I remember her kindness and warmth to open her home and look after us so well. She made us feel so welcome alongside all the members of the family and has created some very happy memories for us of her kindness. Theresa and John
January 4, 2016
To the great DAY family... oh I have such great memories of you Mother
And grandmother... It took Me years to stop smelling like a donut.....I will always remember Jack showing me how to make change. Most of all I remember when you all moved into the big house ..I could not believe any house could have so many bedrooms! Your mom and dad were great to my folks and always sooooo much fun. Love to all of you. Pam Pickett Lee
Pam Pickett Lee
December 31, 2015
In memory of the best mother-in-law ever
Christopher Stocking
December 31, 2015
In memory of the best mother in law ever
Christopher Stocking
December 31, 2015
Sending my condolences to the family. May the God of comfort give you strength and peace during this difficult time. (Psalm 29:11)
December 30, 2015
I had the pleasure of meeting Mrs. Day many years ago through her daughter and my dearest friend Suzy. My impression of her was that she was a very kind & loving mother.
Over the years, I would send Mother's day cards to her & she would always call to thank me, which I thought was not necessary, but she did anyway. I just wanted her to know how much I admired her as a mom.
Verlene Richardson
December 29, 2015
Showing 1 - 7 of 7 results