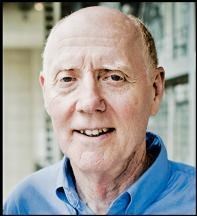 Daryl Gary Baerwald died peacefully with family at his side on November 18, 2015 in Bothell, Washington.

Daryl was born on January 10, 1942 in Seattle, Washington to Herman and Iona (Lannoye) Baerwald. Daryl graduated from Lincoln High School in 1960. He attended the University of Washington and then transferred to Seattle Pacific University, playing for the baseball team and earning Bachelor's and Master's degrees in Education. While there, Daryl made lifelong friendships and met the love of his life, Diane. Daryl retired in 1996 after 31 years of teaching elementary school in the Shoreline School District. He was a popular teacher who earned the Golden Acorn Award.

Daryl treasured his time with friends and family, including playing sports, poker nights, and going on camping and hunting trips. A lifelong fisherman, he spent countless hours fishing for trout, steelhead, and salmon with his father, friends, children, and extended family. Daryl was an avid gardener who enjoyed growing fruit and vegetables to share with others.

Daryl was a devoted husband and father. He was always there to support his children in their school and sports events or to help out. Daryl loved spending time with his three grandchildren. He will be dearly missed.

Daryl is survived by his wife of 48 years Diane (Damron), his children Elesa Field (Mark) and Jeff (Jeannette), and his grandchildren Ethan, Daniel, and Avery all of Bothell, WA. He also leaves behind his brother Dennis Baerwald (Bonnie) and a large extended family of nieces, nephews, brothers- and- sisters-in-law, and cousins.

A celebration of Daryl's life will be held in January. Donations in Daryl's memory may be sent to Alzheimer's Association (alz.org).
To plant trees in memory, please visit our Sympathy Store.
Published by The Seattle Times from Nov. 29 to Nov. 30, 2015.
MEMORIAL EVENTS
No memorial events are currently scheduled.
To offer your sympathy during this difficult time, you can now have memorial trees planted in a National Forest in memory of your loved one.
MAKE A DONATION
Please consider a donation as requested by the family.
MEMORIES & CONDOLENCES
Sponsored by The Family.
11 Entries
He was my fourth/fifth grade teacher and I had such a crush on him as a little girl! Fantastic, kind teacher.
Kai West
Student
December 2, 2018
My thoughts and prayers are with you and your family.
Ann Morasch
January 4, 2016
I loved working with Daryl because he had this clam relaxing way that he handled everything in life. He was so dedicated to his students that he taught. He loved every child that passed through his classrooms and expected the best out of all of his kids. He had a great sense of humor and was always willing to help a fellow teacher. He also loved his wife and kids with all of his heart. I heard many a story about all of them and they were always told with love. I am sure he has earned his angel wings.

Jan Pembrooke- Briarcrest/ Parkwood
December 11, 2015
Mr. Baerwald was my 4th grade teacher in the early 70's. He was a wonderful, dynamic teacher and I had a bit of a crush on him.

As a student at Shorewood High School, I returned to Highland Terrace Elementary and volunteered in his classroom.

In the late 80's, I was honored to become one of Daryl's teaching colleagues at Briarcrest. I taught 3rd grade just down the hall from his 5th grade classroom. He used to tease me about my messy desk. I can still hear his laugh.

Such a wonderful role model for so many students (and colleagues!) over the years!

I will never forget the night I couldn't get my car out of the school driveway because of a snowstorm and Daryl took both me and another teacher all the way home in his little truck!

Such a nice man. Heaven must be happy to be welcoming him!
Leanne Rafter
November 30, 2015
Daryl Baerwald - or Mr Baerwald as we all knew him - was one of those teachers that they write movies about: tough, fun, character-building. Mr Baerwald was my 5th Grade teacher at Briarcrest in 1984. I owe him my times-tables, extensive reading
Nathan Gerards
November 30, 2015
I have always considered Mr. Baerwald to be the most inspiring and encouraging teacher in my life. Through his coaching and what seemed like endless shooting drills he sent me all the way to the Seattle Hoop Shoot Championships. This trophy from 6th grade is probably my most cherised and if I had a trophy case would sit on top of the others I had from high school and college athletics.

What he really taught me was to find your passion and work at it over and over again until you master it. The lessons learned from him in those formative elementary school years are priceless. I thank him and I am sure my patients who I adminster anesthesia to each day are thankful for formative teachers.

My Condolences
Roger Strand
November 30, 2015
I taught at Briarcrest and was a colleague with Daryl. Many of us teachers moved from Primary schools to an intermediate school (Briarcrest) to make K-6 schools. When I arrived, I found Daryl very friendly and kind. He was a stranger to me, but made huge efforts to welcome the new teachers into the building. I didn't get to know him at first because I was in primary grades, but eventually I taught fifth and sixth and that was when I got to know him much better. He and Mr. Ford were a twosome sharing all kinds of stories. As they shared stories Daryl couldn't resist those fish stories and his fishing trips and tips. He even tied a fly for me. Some of those fishing stories were so interesting. Daryl will be remember by me as a very gentle man who was always giving, kind, contemplative and wanting to do what was right for kids. His life touched many and he will be missed. I will pray for the families and those who knew him. May God be with you all. Thank you for sharing about his life. God Bless You
Patricia Shirley
Patricia Shirley
November 29, 2015
My thoughts and prayers are with your family at this time of loss and grief.
Mary Bannister
Mary Bannister
November 29, 2015
Very sad to hear of Daryl's passing, What an awesome man and incredible teacher. He was my 5th grade teacher in I think 1965 at Richmond Beach It may have been his first year as a teacher or close to that an I will always remember him as the best i ever had. Not to mention the cool red corvette that we all loved of course. I was just talking about my grandkids awesome teachers this morning here in Montana and told the story of Daryl, not an hour later my mother called to tell me of his passing, funny how life works. Please pass this on to all his family so they can know some of his great legacy. Thank you for sharing the story of his life, Kevin Demaray, Helena, Montana
November 29, 2015
Showing 1 - 11 of 11 results