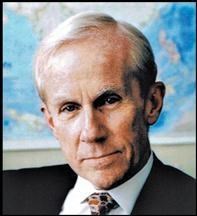 Richard (Dick) William Richter, 88, died on June 29, 2018 in Issaquah, WA. He is survived by Joan, his wife of 67 years, two sons, Dave (Jenni) and Rob, as well as granddaughter India and grandson Kai, and eight nieces and nephews.

Born, raised, and educated in New York City, Dick became an award-winning journalist, working for newspapers and television in New York and Washington, DC. After retiring from ABC News and WETA, he was appointed President of Radio Free Asia. Supported by Congress, its mission was to broadcast to those nations in Asia that had no freedom of the press. At Radio Free Asia, he assembled a team of journalists and technicians that created programming broadcast in nine different languages.

Earlier in his career, shortly after JFK launched the Peace Corps, Dick served as an evaluator of Peace Corps programs, traveling to nine different countries, including Afghanistan. Subsequently, he became Deputy Director of the program in Kenya, where he lived for two years with his wife and two young sons, traveling throughout East Africa. This experience opened the world for the Richter family and launched a lifetime of traveling to distant lands.

Nine years ago, Dick and Joan moved from Washington, DC to Timber Ridge, a continuing care community in Issaquah, where they made new friends and became involved in the community. Dick served as President of the Resident Council. Baseball had always been his favorite sport and he soon became a Mariners fan. To honor Dick's efforts to deliver in-depth news you may donate to the PBS Newshour. Contact Jen Brake at [email protected] or by mail at PBS Newshour, 3939 Campbell Avenue, Arlington, VA 22206.
Published by The Seattle Times on Jul. 1, 2018.
To plant trees in memory, please visit the Sympathy Store.
MEMORIAL EVENTS
To offer your sympathy during this difficult time, you can now have memorial trees planted in a National Forest in memory of your loved one.
MAKE A DONATION
MEMORIES & CONDOLENCES
Sponsored by The Family.
6 Entries
Dick was a wonderful friend. We both wrote stories for our Newtown
high school newspaper (X-Ray) . He was always interested in sports.
God bless you.

Joe Milano
Joseph Milano
Classmate
February 12, 2021
Joan and family, I only just came across Dick's obituary today and wanted to send my deep sympathy to all of you. I ,of course have such great memories of you, Dick and the boys as we were growing up. Remembering the summer you came to Vermont and made a delicious apple pie. Also visiting you in Tarrytown where you took me to Sleepy Hollow. And the trip to Washington in the early 60s where we all visited you guys. Time seems to fly by yet all those wonderful times with your family and mine are and will always be so special. I remember them as if it were yesterday. Dick lived an amazing life and accomplished so much. I will be thinking of you at this difficult time and am so glad there is family to share all of this with you. All my love and sympathy, Lucy Binn Haskell
Lucy Haskell
October 6, 2018
Jim Jorgensen
July 23, 2018
A great journalist and wonderful human being. His insights, and especially his friendship, enhanced the lives of all around him. Fond memories.
Tim OBrien
July 5, 2018
Tim OBrien
July 5, 2018
We are saddened to learn of the passing of Dick, but grateful for his service to our nation with the Peace Corps.