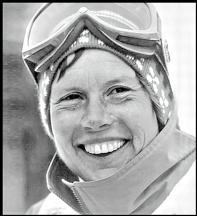 She graduated high school in Woodburn, Oregon in 1953 and Willamette University in Salem, Oregon in 1957. Dollie and Hugh Armstrong were married in 1957. She received her M.S. from Syracuse and helped develop the physical fitness program for the 1st class of Peace Corps volunteers. Dollie taught physical education for years before starting her family. She and Hugh have 2 children, Debra and Olin and 3 grand-children Heidi, Max and Adelyn.

Dollie's life was committed to public service beginning with volunteering at her children's pre-school. She served on the Washington State Centennial Commission and was President of the Board of Directors of the Washington State Centennial Games. She met and was thanked for this work by President George H. W. Bush. Dollie became President of the SKIFORALL Foundation (now Outdoors for All) in 1986 and named Executive Director in 1990. She was inducted into the National Disabled Ski Hall of Fame and received a certificate of appreciation from Washington State Governor Mike Lowry for this work. Dollie was a PSIA certified ski instructor and Division Clinic Leader. She impacted hundreds directing crafts at Camp Nor'wester and was famed for teaching bread baking. She co-founded the Washington State Ski/Snowboard Museum. Dollie competed at a high level in tennis and taught skiing at Alpental, Breckenridge and in Japan. She golfed in 21 states, nine countries and on four continents. Dollie touched lives around the world.

Outdoors For All Foundation

Service Details and Guestbook at http://www.harveyfuneral.com/obituary/dollie-armstrong
Published by The Seattle Times on Mar. 3, 2019.
To plant trees in memory, please visit the Sympathy Store.
MEMORIAL EVENTS
May
4
Celebration of Life
5:00p.m.
Montlake Community Center
1618 E. Calhoun St, WA
Funeral services provided by:
Harvey Family Funeral Home
MAKE A DONATION
MEMORIES & CONDOLENCES
Sponsored by The Family.
8 Entries
Dollie and Hugh were treasures for many summers at Camp Nor'Wester. From crafts to helping campers through their various challenges. She (and you Hugh) touched the lives of so many, especially in the skiing community. Dolly is a tremendous loss to thousands. She was so special.
chuck curran
Friend
May 22, 2019
The Demarest/Richardson family sending warm embraces to the Armstrong family for the loss of dear Dolly. Her warmth and gentle kindness will be missed.
Lori Davies
Friend
March 23, 2019
We were so sorry to her of Dollie's passing. She was so positive and encouraging when we taught at Alpental. She was an inspiration to all of us! Hugh, please know that you, Debbie and Olin are in our thoughts and prayers. Extending our deepest sympathy.
M.P. and Richard Loewy
Friend
March 4, 2019
Al Cohen
March 4, 2019
Sending the beauty of the mountains and snow of Breckenridge to comfort you all. I will always have the look of Dolly's smile to remember, and I know she built a strong, grateful, and supportive family to handle both the joys and sorrows of life. Thinking of you all, Jane Tarlow
Jane Tarlow
Coworker
March 4, 2019
Hugh, My condolences. I always really liked Dollie and thought she was so positive and warm. I remember when you both came to visit us in NYC when I was about 10 and I thought you were both such an impressive pair of adults and I thought Dollie was so charming. Every time we met again over the years, I always felt the same. She was great and always will be.
john leahy
Family
March 3, 2019
Hugh, I was so sorry to hear of Dollie's passing. I wish you and your family well. I remember Dollie as being a wonderful bubbly person and I admired her very much.
john leahy
Family
March 3, 2019
Hugh, your old friends from Breckenridge are so saddened to hear of Dollies passing. I treasure those ski days we shared. Always our best for you and the family.
Breck friends...
Friend
March 2, 2019
Showing 1 - 8 of 8 results