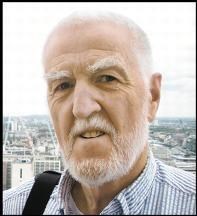 George Richard Rolfe died unexpectedly on Tuesday, April 30, 2019 after a fall at his Guemes Island home. He was an only child born on July 5, 1937 to John and Helen Rolfe, and was preceded in death by his first wife of 41 years, Maryann Lovett Rolfe. George was husband, father, step-father, grandfather, friend to many, university educator, real estate developer, architect, world-wide traveler, baseball lover, and driver of his tractor on his beloved Guemes Island property.

George earned his degrees at Iowa State University and the University of Pennsylvania. He taught at the University of Washington School of Built Environment (formerly known as the School of Architecture) for 32 years and was a pioneer of real estate education. He held the Filley Endowed Professor Real Estate and helped shape the Runstad Center for Real Estate Studies and the school's Masters' program. He inspired generations with his integrity and practical wisdom. He leaves behind a vast network of alumni and friends whose lives and career were profoundly shaped by his influence. To each he gave the gift of his own brilliance and vision. Many of his hundreds of students became leaders in the community and share stories of their memorable George Rolfe class experiences. While known to be a demanding professor, his students credit him for having a tremendous impact on shaping their careers.

Not only did George Rolfe make a difference as a professor, but also as the first Director of the Pike Place Market Public Development Authority in 1973. He played a significant role in the rehabilitation and the economic revitalization of the Market. Under his leadership, the vibrant urban space of the market became more pedestrian-friendly and included both regular and low income housing. When he retired in 2016, Mayor Edward B. Murray proclaimed May 26, 2016 George Rolfe Day.

In the early 1980's, members of Plymouth Congregational Church noticed people sleeping on the sidewalk outside the church. George had been a close observer - having built low income housing into the fabric of the Market. He and others led the leasing of many buildings, starting first with the Seven Seas Hotel, that was ultimately the forerunner of Plymouth Housing. They realized residents needed more than a room. From this developed the concept of "Supportive Housing" that Plymouth Housing uses today to shelter over 1,000 formerly homeless residents.

If making a difference to the community, to his profession, to his grieving family and to his many devoted friends all represent a measure of his lifetime, then George excelled in every endeavor. He will be greatly missed. George Rolfe's full, busy, happy life brought much joy to his family and friends.

These traits will be evident at the celebration of his life to be held at Plymouth Congregational Church on June 2, 2019 at 2:00 pm followed by a reception. Ever frugal with himself, George was most generous with others. In lieu of flowers, donations may be made to Plymouth Housing or to the charity of your choice.
Published by The Seattle Times from May 12 to May 19, 2019.
To plant trees in memory, please visit the Sympathy Store.
MEMORIAL EVENTS
Jun
2
Celebration of Life
2:00p.m.
Plymouth Congregational Church
WA
MAKE A DONATION
Please consider a donation as requested by the family.
MEMORIES & CONDOLENCES
Sponsored by The Family.
3 Entries
George Rolfe was one of the professors in my life that deeply impacted me. He was the only professor who I would visit during office hours. I didn't do so to get help with the work, I did so to spend time with George and learn what I could from him. He fueled my interest in real estate that lead me on my career path. He was an incredible man, and I'm sure I'm not the only one who was impacted by him in this way. I'll keep his family in my prayers.
Nick Diede
June 3, 2019
Thanks so much George for all you taught me... you were one special man! I so much appreciate your wisdom, candor, and friendship. Best to all your family...
Kathryn Gardow
May 23, 2019
Professor George Rolfe had played as my first mentor lead me to the world of real estate when I was a senior majoring in Construction Management at UW. At the time when I was uncertain about my future, professor George Rolfe provided me advice and guidance. It's been a while, but I still remember his kindness and encouragement. May God bless you and your family in this time of sorrow. May his soul rest in peace.
Shawn Zhang
May 23, 2019
Showing 1 - 3 of 3 results