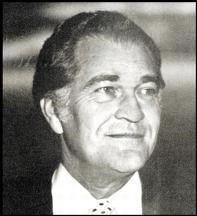 George A. Wade B.S., M.B.A., double Ph.D., C.P.A, was an amazing man; how do you briefly sum up a life of so many accomplishments?

Born May 14th, 1929 in Seattle, WA to George L. and Annie Wade, he was an honor student at Ballard High School and earned a National Scholarship at age 16 to attend Yale University from which he graduated Phi Beta Kappa in 1950. While at Yale, he was the captain of the track team and won the national intercollegiate mile race and set a new U.S. record. After setting the IC4A mile record and running a 1:51.3 880 in the NCAA, in 1950 George literally took off his track shoes forever at the age of 20. Many international invitations ensued in 1951, but George just "racked it up", and as George put it "mercifully never had to put to the test Sir Roger Bannister's gracious compliment (Sports Illustrated, 1954) that I might have beaten him to the 4-minute mile". His athletic prowess was not limited to track, he was an innately gifted athlete who could pick up any sport with ease.

In 1951 he married his first wife Jean Gunderson of Seattle, and over their 23 year marriage they had four children; Laurence D. (deceased), Catherine A., George A. Jr, and Sandra J.

Over his 65 year business career, George was owner, principal, director, chairman or president of many companies within the real estate, manufacturing, wholesaling, retail, and consulting industries. Most notably he co-owned the chain of men's clothing stores known as The Squire Shop, through which he was a large supporter of Seafair and the hydro races where Chip Hanauer raced his hydro "The Squire" to many exciting victories. Additionally, under the Reagan and Bush Administrations he was twice appointed to be a U.S. commissioner to an international regulatory agency, an honor of which he was very proud.

In 1977, George married Arlene Hinderlie (deceased in 2013) of Port Orchard, WA. They had one child during their 35 year marriage, Brady E.

Long active in civic and cultural activities, he was a trustee of, or consultant to a number of not-for-profit organizations, among them; Historic Seattle Preservation Society, Seattle Symphony, Seattle Chamber Music Festival, ArtsWest, Cornish College of the Arts, Southwest Seattle Historical Society, and Pacific Lutheran Theological Seminary. George was also instrumental in the establishment of the Duwamish Longhouse Museum.

George's unconditional support was appreciated by many of his family, friends and loved ones. He was a glass-half-full type of person; an optimist who always chose to look at the positive. Whenever you needed a cheerleader, he would be the first to pick up the pom poms and had a way of making you feel like a winner regardless of the actual outcome. He loved celebrating the strengths and accomplishments of his family and friends (and often himself), and what a life of distinction he led!

George passed peacefully at home in his sleep on January 26, 2015 at the age of 85. Although it was unexpected and before anyone was ready, we choose to live by the example he set and look for the positive. He joins loved ones lost; his wife Arlene, son Larry and grandson Allan Johnson. We are sure that upon arrival at his ultimate destination, in his ever amusing manner, his first words were;

He is survived by his children Catherine A. Thomsen, George A. Wade, Jr., Sandra J. Johnson, and Brady E. Wade as well as 5 grandchildren and 3 great-grandchildren.
Published by The Seattle Times on Apr. 5, 2015.
To plant trees in memory, please visit the Sympathy Store.
MEMORIAL EVENTS
To offer your sympathy during this difficult time, you can now have memorial trees planted in a National Forest in memory of your loved one.
MAKE A DONATION
MEMORIES & CONDOLENCES
Sponsored by The Family.
4 Entries
Sorry, I just found this obituary. George was a really, really nice man when we were kids growing up. I am sure Cathy, George, and Sandy miss him very much. I'm sorry for your loss.
All the best,
Mary (Lair) Dillon
Mary Lee Dillon
December 7, 2018
The family of the late Mike and Verda Isaacson of Portland, OR (Kari Sue, Steve, Doug and Kristi) send their condolences to Kathy, Sandy and Jordy (and Brady too) on the passing of your father George. We have very fond memories of family get-togethers on the Oregon coast, Bayshore and in Seattle in the '50s and '60s. He was an amazing man. Our deepest condolences to all of his family and friends. Warm regards, Kari Isaacson
April 6, 2015

We will never forgot your friendship, generosity, kindness and love to our family...so many wonderful times. RIP dear George and hold Arlene tightly in your arms.
April 5, 2015
I'm sorry for your loss. Keeping in mind the scriptural hope of everlasting life can help sustain you.
--John 17:3--
April 5, 2015
Showing 1 - 4 of 4 results