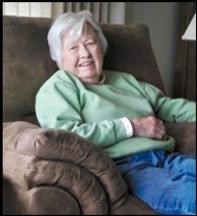 Gladys O'Leary (Schwendeman) passed away peacefully on July 09, 2020. She was born in Seattle on July 25, 1929 to Peter and Dorothy Schwendeman. Gladys grew up in South Seattle and graduated from Franklin High School in 1947. After graduation Gladys worked for the Seattle Police Department as an office worker. Seeking adventure, Gladys spent one tour as a U.S. Army Clerk with her future sister-in-law Genny in Yokohama Japan where she met the love of her life Al. They were engaged on their second date and married on July 4, 1953. They lived in the Bryn Mawr area of Seattle for the next sixty years raising their family of four. They also spent summers in Alaska at various salmon canneries where Al worked as a superintendent. After thirty years going North, Gladys went to work for the Washington State Liquor Stores where she spent ten years working her way up to Assistant Manager before retiring in 1995.

Gladys was an incredibly generous lady with a tremendous heart. She loved baking and entertaining family for Sunday dinners, and was known for making the best pies and cookies from scratch. She resided the last nine years at The Lakeshore in South Seattle.

Gladys is preceded in death by her loving husband of fifty four years, Al. She is survived by her children Kathy, Jean (Art), Patrick and Peter (Teri); three grandchildren Brian (Crystal), Kathleen, and Bonnie (David), one great-grandchild Jasper; and siblings George (Ardeth) and Peter (Sandy).

A memorial service will be held at a later date. Remembrances may be made by offering a donation to the Skyway Fire Department.
Published by The Seattle Times on Jul. 19, 2020.
To plant trees in memory, please visit the Sympathy Store.
MEMORIAL EVENTS
To offer your sympathy during this difficult time, you can now have memorial trees planted in a National Forest in memory of your loved one.
MAKE A DONATION
MEMORIES & CONDOLENCES
Sponsored by The Family.
2 Entries
Please accept my warmest condolences on the passing of Gladys. She was one of my favorite relatives as she was an extremely caring, warm, and genuine person who always made people feel welcome and comfortable in her presence. Those memories start as far back as childhood at family gatherings and continued through the last time I visited her at the Lakeshore Retirement Center. My mother also felt the same towards Gladys and Al and often during their retirement years they would visit and go to lunch together, I joined them when I could on several occasions. Gladys always had a kind word and a smile for everyone she encountered. I always enjoyed seeing and talking with her; she will be missed.
Patty Pelland (Schwendeman)
Patty Pelland (Schwendeman)
Family
July 25, 2020
Sue and I were saddened to see the obituary for Gladys. Al was one of my life long and best friends. After he and Gladys were married, I knew that they had made the right choice. She was truly a wonderful person. Sue and I share in your sorrow for the loss of Gladys.
Don and Sue Holmes
Don Holmes
July 24, 2020
Showing 1 - 2 of 2 results