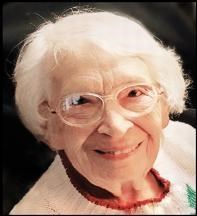 Ivy Jean (Coxson) Kerlee passed away gently on January 4, 2016, in the company of her son David and daughter Lynn, at the Providence Medical Center in Everett, Washington.

Born on Dec. 6, 1926 in Vauxhall, Alberta, Ivy kept a sense of the wonder and adventure of the prairie to her last days. As the daughter of a ministering couple, Rev. Clyde and Jean Coxson, she survived early, challenging incidents of plains life, growing up in the special comradery of those difficult times. In charge of younger siblings and children at church camp meeting grounds, she developed a personal style and commitment to teaching that characterized the rest of her life.

After high school in Kamloops, British Columbia, Ivy attended Seattle Pacific College (now University) in Seattle, Washington. While acquiring a teaching and art degree she met a physics student, Donald Kerlee. Their marriage of over sixty years was dedicated to education in every way that presented itself; she taught public, private, and Sunday school, and nurtured family and the children of friends. With Don, she adopted four children, Daniel, Melinda (Lynn), David, Lucinda (Cindi), and later brought two special Chinese graduate students, Howard Hao and Lucy Chen, into this country and her family.

Don's career, and their wide-ranging family on both sides, afforded many opportunities to see Canada, the United States, and the rest of the world. When Don's career took him into administration and eventual presidency of Roberts Wesleyan College in upstate New York, she played the role of hostess with openness and energy. Later, she and Don spent several summers of service in Bejing, China, teaching English to Chinese teachers there. When Seattle Pacific acquired a new campus on Blakely Island in the San Juans, Ivy created a summer camp around an historic pioneer cabin, where young teenagers got to experience the domestic and life skills that had been a necessity only two generations before. Upon retirement with Don to Warm Beach, Washington, she painted, and created gardens that were enjoyed by the community for many years.

Ivy rejoins Don who passed away in 2012; she is survived by all her descendants and their spouses, her sisters Esther Taylor and Elsie Carlson, her brothers Stanley and Wesley Coxson, and many nieces, nephews, cousins, their families, friends too numerous to name here but all dear to the end.

So thankful for the opportunity to know this precious lady! Her priorities were
loving her GOD with all her heart, soul, and mind, and blessing others with whatever she could give, make, and create! Her entire life is such a legacy and model for how to live a life that is truly done right!
Thanks to Ivy for her perfect example of being devoted to GOD, and sharing life with family and others.
S Sherritt
January 9, 2016
Showing 1 - 1 of 1 results