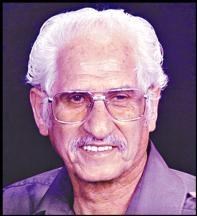 away peacefully at home surrounded by his loving family on September 7, 2020 at the age of 91.

John was born at the family home in "Garlic Gulch" on January 19,

1929 with the help of his loving Aunts. He was the second born son of John B. Sacco and Elizabeth Rickenbacker Sacco, preceded by his brother Carl.

He attended Mt. Virgin Grade School and graduated from Franklin High School in 1947. An independent soul, he attempted to sign up as a cabin boy in the Merchant Marine during WW2, but was stopped by his mother before he could get aboard. He served during the Korean War at the Atomic Bomb plant at Hanford, Washington as an anti-aircraft gunner on the Quad 50 machine gun. He lived in a tent for two years in the desert and would never sleep outdoors or in a tent again for the rest of his life.

He met the love of his life Elsie Novito and they were married on April 24, 1954; a marriage that lasted for over 66 years. He held several jobs, but finally settled in at Seattle City Light, at first a cable splicer and then in the street light division retiring in 1990 after 30 years.

A quiet genius, he could make anything and do just about everything he put his mind to. He remodeled the house he and Elsie have lived in for nearly their whole married life, working on it after his work day ended and then on weekends. He had many hobbies; from building his own darkroom for color photography to being an expert airplane model maker. He could look at a picture of an airplane and build it from scratch and fly it, but flying model aircraft only wetted his appetite for flight and he learned how to pilot sailplanes and then small engine airplanes. He was a past member of the Puget Sound Soaring Association. He also belonged to other clubs. A past member of "The Cascade Mountain Men" and present member of "The Sons of Italy" and the "West Seattle Italian Club".

Donations may be made to St. Jude Hospital. Sign John's online Guest Book at www.Legacy.com
Published by The Seattle Times on Sep. 20, 2020.
To plant trees in memory, please visit the Sympathy Store.
MEMORIAL EVENTS
To offer your sympathy during this difficult time, you can now have memorial trees planted in a National Forest in memory of your loved one.
MAKE A DONATION
MEMORIES & CONDOLENCES
Sponsored by The Family.
1 Entry
Elsie, I very sorry to read of John's passing and extend my deepest sympathies. I still have the antique pistol that John built for me in 1983 and value it highly. My wife died two years ago but I still survive at age 92. Best wishes.
Merle Hanley
Friend
September 22, 2020
Showing 1 - 1 of 1 results