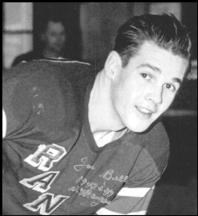 His career was interrupted by Canadian Navy service during World War II, where Joe fought the Battle of the North Atlantic against Nazi Germany. After WW II, he resumed his hockey career with the Rangers. During his lengthy career he was selected to several all star teams, and was WIHL scoring champion in 1955, while wrapping up his career with the Seattle Ironmen who were soon renamed the Totems. Joe was inducted into Manitoba Hockey Hall of Fame. He was also an avid low-single digit handicap golfer and bird hunter, he truly loved the outdoors. Once birdied 5 holes consecutively, and lipped-out the 6th, and spent countless hours hunting and on walks with his black labs, Sam and Andy.

Donations should be made to your favorite charity. Special thanks goes out to the staff of "A Loving Heart" AFH in Bothell for the exceptional care they gave dad.

Guestbook at harveyfuneral.com
Published by The Seattle Times on Feb. 23, 2014.
To plant trees in memory, please visit the Sympathy Store.
MEMORIAL EVENTS
Mar
1
Graveside service
10:00a.m.
Calvary Cemetery
5041 35th Ave NE, Seattle, WA
Funeral services provided by:
HOFFNER FISHER & HARVEY FH
MAKE A DONATION
Please consider a donation as requested by the family.
MEMORIES & CONDOLENCES
Sponsored by The Family.
9 Entries
This candle is for Joseph, Jo and Julie. I have just now heard about these sad times.. I am so sorry for the families loss. May you all rest in peace with our Lord forever amen
Sue Hewett
July 6, 2015
Dear Family,
With sympathy and friendship, we Sisters lovingly support you in prayer at this time when Joe's life has changed from mortal to eternal. May his new life in God's presence bring great comfort to you all.
Sisters of the Holy Names of Jesus and Mary
March 3, 2014
Growing up Jo and Joe were like an Aunt and Uncle right up the street. The neighborhood and world is a better place for having had them. I will always cherish our time with them.
David Watkins
March 1, 2014
Rest in Peace Uncle Joe. I was so lucky to have you and Auntie Jo as my godparents. You always had a smile on your face and always took the time to talk to me, and more importantly listen to me. I am glad you are with Auntie Jo and Julie.
Molly Brady
February 27, 2014
Joe you are a great friend and a wonderful tutor. You tought me how to become a good pro hockey player. Jo and Joe are very special people. Joe's friendship and wisdom will be remembered forever. Thank You my friend, rest in peace.
Ray Kinasewich
February 27, 2014
R.I.P. Mr. Bell, you were a wonderful man & I'll always cherish those phone calls chatting about the great game! You were a gem & will never be forgotten
Greg Kaufman
February 24, 2014
I have such wonderful, loving and fond memories of Joe and Jo! They were always there for me and my children and we were never at a loss for homemade cookies and candy! Rest in peace, Joe.
Madelyn Downs
February 24, 2014
Jo and Joe Bell were wonderful neighbors on 11th Ave. NE, and we dearly miss them. We're glad they're finally reunited, though--and what a joyous reunion it must have been. Love and condolences to their family.
Ginny and Don Moore
February 23, 2014
Joe.
RIP on behalf of an old NY Rangers teammate 42-43 and 45-46 during WWII. You always kept your head up and your skates sharp. Condolences to family and friends.
Alf Pike 1917-2009
Tom Langton
February 23, 2014
Showing 1 - 9 of 9 results