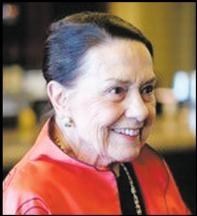 June Arlene Boeing, the loving matriarch of our family, passed away on June 10, 2020, just past her 94th birthday.

June loved life and lived it well. From a young age, her beauty, confidence, strength and determination were her hallmark. She dearly loved her family, her multitude of friends, her faithful dogs and her beautiful garden, but not necessarily in that order. We always knew where we stood in her pecking order, and the dogs usually took first place!

June, a native Seattleite, was born to Clyde and Irene Tinkham on May 26, 1926, and grew up in the Rainier Beach neighborhood. Her father was a Seattle City firefighter, stationed in the Denny Regrade, and died when June was just a child. Her mother raised their two young daughters and worked for many years for the Boeing Company until her retirement.

June attended Franklin High School, and was crowned Queen of Rainier Beach. She taught herself to drive when a relative left keys in the ignition...afraid of stopping, she just waved when she passed a police officer and kept on going! After high school, June, always the independent one, struck out on her own. It was the early years of WWII, and while many of her male high school counterparts had gone off to war, she worked as a ship fitter/machinist at Todd Shipyards.

It was in 1947 that she met Frank Proffitt, a handsome young WWII vet, and married soon after. Frank built a home for his young family overlooking the north end of Lake Washington, where their girls, Cindy and Sandy were raised. June, a passionate and avid gardener, tended to her yard many evenings well after dusk, when her daughters would say, "Mom, are you ever coming in?"

June struck out on her own again in the early 60's, working as a model for the local department stores, and later as a hostess at an elegant downtown restaurant, The Dublin House, on the corner of 4th and Union. With her hard work and sparkling personality she became the restaurant's manager, and survived many a raucous St. Patrick's Day celebration, as The Dublin House was "the place to be" in downtown Seattle on that day. It was here that June met Eugene Clark, of the Seattle-based Clark's restaurants chain, of which The Dublin House was a member. She and Gene were happily married until his death in 1981. They both loved boating and fishing, taking many trips to the San Juan's, and the Canadian Gulf Islands. Many winters, they would make a trip for steelhead fishing on the Hoh river, and summers were spent fishing in Canada or Alaska. June's claim to fame was catching a 56-pound salmon on the Kenai River, of which she proclaimed, "Was bigger than any fish a man ever caught!" She remained a member of The Seattle Yacht Club until her death.

June was a widow for many years, but kept active in her garden, caring for her dogs, taking cruises with friends and taking up golf and bridge in her 60's.

In 1990, she became reacquainted with William Boeing, Jr. and they married in 1991. They settled into their home in Broadmoor, where June spent many hours tending her lovely garden. Every spring, sweet peas were the first flower to be planted, and their fragrance filled the house throughout the summer. They were members of the Broadmoor Golf Club, where she played weekly bridge and golfed until the age of 90. Bill and June had a wonderful life together and traveled the world. They, too, enjoyed fishing and cruising together in Alaska. Every winter they and their dog, Toro, would head south to their home in Rancho Mirage, California, where they were members of the Thunderbird Golf Club.

Sadly, Bill passed away in 2015, at the age of 93. Because of Bill and June's devotion to Seattle Children's Hospital, and her love of gardening, June was honored with the dedication of The June Boeing Rooftop Garden atop Building Hope, outside the cancer-cure unit for children and young adults. In the garden, patients may enjoy a moment of respite, fresh air, and views, just outside their rooms.

June will always be remembered for her beauty, her dry sense of humor, her laugh, her stylish attire and her apple pies. Her natural beauty belied her years. She will be greatly missed by all who knew her.

June is survived by her sister, Gloria Krum, her daughters, Cindy (Scott) Abrahamson, Sandy (Brad) Barnard, and three grandchildren: Adam McNae, and his wife Aimee, Alexa McNae and her husband Neal Paragas, and Jacob Barnard. She is also survived by four great-grandchildren: Isla and Roan McNae, and Paloma and Lewis Paragas. And of course, our family of dogs: Poki, Lulu, Rigby, and her new favorite, Willy!

Our unending and heartfelt thanks to all of Mother's dedicated caregivers over the years: Elizabeth, Kathleen, Julia, Katie, Ginny, Chanel, Kathy, and Josephine. Our special thanks to

Charlie Ryan, Mother's longtime personal chef, who kept her laughing to the end! She adored you!

And, finally, to Brad, her devoted son-in-law, who watched over her in her final years, of whom June said, "I don't know what I would do without him." And to Adam, her oldest grandson, who made his Nana's face light up whenever he entered the room. She loved "the boys!"

Her final request was,

In lieu of flowers, and in recognition of June's love of gardening and animals, please donate to one of June's favorite charities:

A celebration of June's life will be held at a later date, when we are all able to gather again. 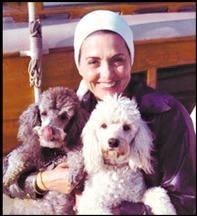 Published by The Seattle Times from Jun. 12 to Jun. 14, 2020.
To plant trees in memory, please visit the Sympathy Store.
MEMORIAL EVENTS
To offer your sympathy during this difficult time, you can now have memorial trees planted in a National Forest in memory of your loved one.
MAKE A DONATION
MEMORIES & CONDOLENCES
Sponsored by The Family.
3 Entries
June was an amazing woman who lived a full life. She is, was, and always will be so loved.
Julia L.
Julia Lindquist
Friend
June 14, 2020
June and my mother, Kay Thomas, attended grade school and high school together and kept in touch over the years. June gave me my first job working in the coffee shop at the Washington Building when she managed it and The Dublin House. My mother passed away a few days after Christmas. The three of us had lunch together at the yacht club a year or so ago. We spent time chatting at Junes home afterwards. It was lovely listening to them exchange stories and anecdotes about their youth. Im sorry for your loss. I will remember June as the beautiful, warm, elegant woman she was.
Toni Anderson
Acquaintance
June 14, 2020
June was and will forever be the epitome of "class". I hold everlasting memories of her, Cindy and Sandy as we joined together at Christmas and Thanksgiving. It was a look at class and grace in action which has transcended to her entire family. June gave me my first job at 15 at the Dublin House where I had the time of my life! She was my Aunt.
Rich Riser
June 13, 2020
Showing 1 - 3 of 3 results