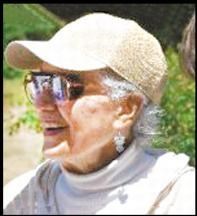 Nancy died peacefully after a long and fulfilling life.

Nancy was born in Minneapolis Minnesota and moved to Seattle as a teenager. She graduated from Ballard High School, a proud Golden Beaver. She attended Central Washington State College in Ellensburg, Majoring in Elementary Education and Minor in Pinochle. After more than a decade raising children, she returned to school at the University of Washington where she received her degree in Elementary Education in 1963.

It was at Central Washington State where she met the love of her life, Les Malmgren. They married in March of 1949 and had 4 children, Charles, Judith, David and Kelly. They started their early life together in a houseboat on Portage Bay. As their family grew they moved to Ballard and then to Broadview where she lived next to her beloved Carkeek Park for 60 years.

Nancy had a beautiful singing voice which was greatly enjoyed around a campfire and in concert with Philomel. She was interested in politics, joined League of Women Voters, and was an active Democrat. A born Community Activist, she constantly strove to make a difference. She was PTA President, Girl Scout Leader, Democratic Precinct Committee Person, member of ACLU, NAACP, Mental Health North and Planned Parenthood.

During time spent working with the Girl Scouts at Carkeek Park, a visionary plan developed to rehabilitate and bring salmon back to Pipers Creek. She created the Carkeek Park Advisory Council and the Carkeek Watershed Community Action Project, gathered support and funds to make the vision real. Collaborating with Boy Scouts, Girl Scouts, family, friends, Seattle Parks, Seattle Public Utilities, Seattle Public Schools, the UW School of Fisheries, the Washington State Dept. of Fish and Wildlife, the Suquamish Tribe and many others she was able to restore the creeks and bring back the salmon. Earth Day at Carkeek Park was her special holiday.

Working with the City and Parks she raised funds from all over, building a unique Leed Platinum facility, The Nancy Malmgren Environmental Learning Center at Carkeek Park. She received both the Jefferson Award and the Denny Award for her service to the community.

She is survived by her children Charles (Wendy), Judith (Bruce Maresh), David and her grand-children, Samuel Johnson, Lizzy and Amanda Malmgren. She is predeceased by her husband of 57 years Arthur Lester Malmgren and her son Kelly Karl Malmgren.

Donations in her memory can be made to the Carkeek Watershed Community Action Project.

Memorial service will be held at The Carkeek Park Environmental Learning Center on Saturday, December 17 at 1:00 p.m.
Published by The Seattle Times on Nov. 20, 2016.
To plant trees in memory, please visit the Sympathy Store.
MEMORIAL EVENTS
Dec
17
Memorial service
1:00p.m.
The Carkeek Park Environmental Learning Center
WA
MAKE A DONATION
MEMORIES & CONDOLENCES
Sponsored by The Family.
9 Entries
My first memory of Nancy is as an angel in the Christmas pagaent at Northminster church in Ballard while in High School. I visited her at college and was there when she married Les and moved on the houseboat.
Our lives took different paths and we only spoke twice in the ensuing years.
I caught up with her just recently and found out what a fantastic life she had lived. She was truly an earth angel devoting her life to the Carkeek Park Salmon project.
My condolences to her family and friends. Lenetta Nelson Johnson
Lenetta Johnson
March 12, 2017
I spoke to Nancy often while I worked for DFW, but never had the opportunity to meet her in person. Her passion for fish and wildlife was infectious. She was always polite and someone I will never forget. I no longer work for the Dept but she left a mark and I wanted to share my condolences. Nancy was a great person and someone that will not be forgotten.
Kailey
January 1, 2017
In loving memory of a great soul. From Jane & Jim
Jane. & Jim Oswald
December 17, 2016
I met Nancy Malmgren when I served as scribe for the City of Seattle's Drainage & Wastewater Citizens' Advisory Committee of which Nancy was a member. Nancy was passionate and outspoken about protecting all Pacific Northwest's waters. She was a 'force to be reckoned with.' I liked her!

My condolences to Nancy's family and friends. The citizens of Seattle share in your loss.
Kathryn Altman
December 8, 2016
Crossing Over
By Jodene Smedvig

Best wishes and remembrance to the entire family. Love Jodene
Jodene Smedvig
November 23, 2016
We just wanted to pass on our condolences to our food neighbors from Whidbey Island. So sorry for your loss.Rae,Corey, Bill Touchette
Bill Touchette
November 23, 2016
Besides her many hat's I remember during Christmas Mrs Malmgren would put on a big Christmas party. We ate and talked and then walk down to Carkeek Park and build a bonfire. I remember one Evening it was snowing and all of us bundled up waiting for the Christmas Ships. They stop in front of Carkeek Park and we all be eating smores and singing holiday spirit. Mrs Malmgren never was afraid to speak what was on her mind when it came to our community and had a vision that was second to none. I really appreciate the time over the years to have had the opportunity to to have known her and the family. God Bless,. Rudy from Ballard
Rudy PANTOJA-McCoy
November 23, 2016
Nancy made contributions to Seattle that will last beyond our memory. She educated so many of us about watersheds and salmon. She was a tireless and enthusiastic advocate and she will be missed. I have thought of her often as I have observed the salmon returning to spawn this month in Pipers Creek. And I am always grateful to her that I can have that experience within our urban environment.
Catherine Anstett
November 22, 2016
My condolences to Judy and the entire family.
Sheila Sandusky
November 20, 2016
Showing 1 - 9 of 9 results