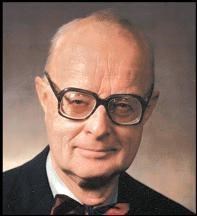 Norman John Johnston, born in Seattle to Helen and Jay Johnston on December 3, 1918, died March 16, at home. Norman grew up in Olympia watching the building of the State Capitol complex. Its great architecture and its unique campus, were factors in shaping his life. Norman enrolled at the University of Washington (UW) in architecture, then changed to art. He pledged Sigma Chi, was elected to Phi Beta Kappa, graduating with a B.A. degree in 1942. After serving in the US Army Signal Corps in Alaska for three years he returned to the University of Oregon where he earned a Bachelor of Architecture degree in 1949. He then served on staff of the Seattle Planning Commission, worked with the architectural firm of Nelson, Sabin & Varey, and became a registered architect. The University of Oregon invited him to join its architecture faculty. This unexpected development led to his realization that academe was where he wanted to be. He earned his master's degree in City Planning from the University of Pennsylvania in 1959, and his doctorate in 1964.

Norman was a founding member and president of Allied Arts of Seattle, a member of the Washington State Board of Registration for Architects and of the Examining Committee of the National Council of Architectural Registration Boards by which American and Canadian architects achieve their professional registration. He took great pride in his role in founding the Washington State Capitol Campus Design Advisory Commission. His unique familiarity with the Olympia campus, his deep affection for it, his concern about the retention of its character, led him to create this body and served on it for 18 years to ensure and augment the campus's extraordinary quality.

The honors and awards Norman acquired are many. Those most prized include a Fulbright Fellowship to Turkey in 1958-59, teaching appointments at Tokyo Institute of Technology 1991 and 1998, Fellow (FAIA) American Institute of Architects (AIA) Medal in 1982, Washington State Book Award in 1989; The AIA Seattle Chapter Medal of Honor in 1990; the Washington State Distinguished Citizen Award in 1991; the Jennie Sue Brown Award in 1997; co-recipient of the College of Fellows' Leslie N. Boney Award, with Jane, in 2003 and the rare honor of being selected and to be added to CAUP Roll of Honor, with his name permanently inscribed on the frieze of Architecture Hall's auditorium. In 2014 the College of Built Environments (CBE), (new name for CAUP), unveiled the Norman Johnston and L. Jane Hastings Gallery in Gould Hall, a permanent exhibit & teaching space honoring the legacy of Norman and Jane at UW and the College.

Norman's marriage to Jane Hastings brought a unique happiness into his life for 46 years. Cherished are outdoor times spent with family and friends berry picking, backpacking with songs around the campfire, walking the ocean beach, or touring world monuments and beautiful gardens. Norman is survived by his wife Jane, nephews Jay (Stephanie) and daughter Elyse of Kodiak AK, Stephen (Gary) of Seattle, and niece Deborah Daley of Phoenix and her son Matthew Bradshaw of Seattle.

The family thanks the wonderful staff of Horizon House Supported Living for the loving care they gave Norman over the past few years. He truly enjoyed them as his extended family, and in encouraging them to further their educations.

Memorial contributions may be directed to: UW Libraries Historic Architecture Drawings Fund; UW Norman J. Johnston Endowed Scholarship Fund; Horizon House, Employee Education Fund; or to a favorite charity.
Published by The Seattle Times on Mar. 29, 2015.
To plant trees in memory, please visit the Sympathy Store.
MEMORIAL EVENTS
May
30
Memorial service
2:00p.m.
Horizon House
900 University Street, Seattle, WA
May
31
Memorial service
2:00p.m.
University of Washington Club on the campus
WA
MAKE A DONATION
Please consider a donation as requested by the family.
MEMORIES & CONDOLENCES
Sponsored by The Family.
6 Entries
Dear Johnston family, I remember when he and Jane got married. It was around the time she taught an architectural class for Seattle Central Community college and I was in her class along with eight others. We all had the privilege to have a lasagne dinner at hers and Norman's house on Lake Union in 1971. It was a house they refurbished and saved and it was beautiful. They were very gracious hosts ad I still keep up with a few of my classmates. Thank you to your family for the beautiful memories. Leslie (Pyle) Osgood
Leslie Osgood
December 17, 2018
When it was absolutely certain that we were graduating in 1964, Professor Johnston called each of us into his office to send us on our way. He and I just laughed at the the words "graduate school".However, he said I think I have a perfect post graduate place for you. Paolo Soleri's Silt Pile, in the Arizona desert. And that was the beginning of a fantastic and wild ride that is still turning out just fine. Rest in peace Professor Johnston, and thank you!

charlie martin
charlie martin
June 30, 2015
Norman will be remembered fondly as an esteemed ambassador of the architectural profession and a leader, mentor, and inspiration to his colleagues over many years. Thank you and rest in peace, Norman.
Andrew Smith
May 28, 2015
Norman's welcome to me as a Seattle newcomer and newly minted Assoc. AIA in 1979 led directly to my active AIA roles and seats on the Seattle AIA Board and everything else that has followed for me professionally. Thank you, Norman. My appreciation and condolences to Jane and family, Rebecca Barnes FAIA
Rebecca Barnes
May 28, 2015
Norman, you will be greatly missed. David Park
April 23, 2015
Rest in peace, Norman. You inspire me every day.
Grant Jones BArch '61
Grant Jones
April 15, 2015
Showing 1 - 6 of 6 results