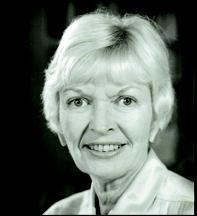 Patricia Denny, died on May 9, 2019 at the age of 93. Born in 1926 to Irma and Lincoln Sollitt, she was raised in Elkhart, Indiana. She went east to college and graduated from Wellesley College in 1948. While working in Boston following graduation, she met and married the love of her life, Brewster C. Denny. Together they embarked on a life of exploration and public service. They lived in the Washington D.C. area and in Europe while Brewster pursued a career in intelligence and foreign policy. In 1961, they moved to Seattle when Brewster became the founding dean of the Graduate School of Public Affairs, which would become the Evans School of Public Policy and Governance. They made Seattle their home, and started a family.

Patricia lived by the words of William Ernest Henley, "I am the master of my fate: I am the captain of my soul." She believed that if you saw something that needed to be done in your community, you did it. It was with that mind-set that she took on many roles. She was a member of the Urban League board in the 1960's and 70's because she believed in defending the civil rights of all persons. She was on the Seattle Art Museum board for over a decade because she believed that the expression of art is fundamental to the human condition. She participated in many community efforts relating to open space and thoughtful urban planning because she believed that communities need gracious spaces to live, work and gather. To this end, she served on several mayoral taskforces over three decades and was an active participant in the Seattle Commons effort.

Patricia was an artist and designer. She received a degree in art from the University of Washington. One of her proudest accomplishments was designing the family home on Bainbridge Island, which was featured in several newspaper articles. Over the years, that home was filled with laughter, joy, hospitality, and buckets of steamed clams.

She was predeceased by her parents and her husband of 63 years, Brewster C. Denny. She is survived by sister, Janet Scholtes; daughter, Maria Denny; son-in-law, Jim Kodjababian and grandchildren Ella and Jacob.

Remembrances may be made to the Brewster C. Denny Faculty Fellowship at evans.uw.edu/give/faculty

celebrating her life will be at

at Noon on Saturday, June 8th.
Published by The Seattle Times from May 22 to Jun. 2, 2019.
To plant trees in memory, please visit the Sympathy Store.
MEMORIAL EVENTS
Jun
8
Memorial service
12:00p.m.
Epiphany Parish of Seattle
WA
MAKE A DONATION
MEMORIES & CONDOLENCES
Sponsored by The Family.
0 Entries
Be the first to post a memory or condolences.