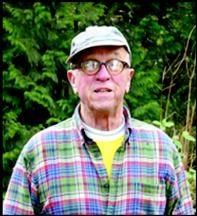 Robert Payne Karr, 83, passed away peacefully on March 16, 2020 at St. Joseph Medical Center in Tacoma. Robert, or Bob as he was known to everyone, was born in Seattle on March 6, 1937. His parents, Day Payne and Susan Fitch Karr, raised Bob alongside sisters Susan and Cindy and brother Bill in homes in the city's hilly Madrona and Mount Baker neighborhoods.

Bob attended nearby Franklin High School and the University of Washington, where he met Judith Ann Hazen. They graduated in 1958 and were married in 1960. Son Bob came in '62, Tim in '64, and Brian in '66. In 1969 the family settled on Bainbridge Island. By then, Bob was working alongside his father Day at a prominent Seattle law firm, which is today named Karr Tuttle Campbell.

On Bainbridge, Bob and Judy built a house out of glass, pine and cedar and surrounded it with a garden of rhododendron, salal, huckleberry, dogwood, snap peas and strawberry. They filled it with relatives and new and old friends, who would gather around a central fireplace to listen to Bob's jokes, laugh at some of them, and soak up Judy's hospitality and warmth.

Bob was a man of overwhelming generosity. In the days since his passing, many have come forward with stories about the ways he encouraged them to persevere through hard times, or mentored them at the moments their lives or careers most needed it. Those from broken families looked to him as a father whose steadiness became the glue that held things together. Later during retirement, he served as a founder, board member or trustee for numerous local charities including the Bainbridge Community Foundation, Islandwood and the Bloedel Reserve.

In lieu of flowers & gifts, memorial contributions may be made in Bob's name to the Bainbridge Community Foundation.
Published by The Seattle Times on Mar. 22, 2020.
To plant trees in memory, please visit the Sympathy Store.
MEMORIAL EVENTS
To offer your sympathy during this difficult time, you can now have memorial trees planted in a National Forest in memory of your loved one.
MAKE A DONATION
MEMORIES & CONDOLENCES
Sponsored by The Family.
5 Entries
Judy and family. So sorry to hear of Bobs passing. So wanted to chat about our spouses declining. Our hearts are with you and I’ll be calling up memories of my lifetime knowing him.
Steve and JoAnn Trick
Steve Trick
Friend
October 8, 2020
Very sorry to see Bob has passed...sincere condolences to his family...
Diana and Brad Hill
Diana Hill
March 22, 2020
BK and family, I am very sorry for your loss. I only visited your home and met your Dad once, but it was memorable. I hope all goes as well as possible during a tough time.
Todd Watson
March 22, 2020
Fond memories of being with Bob back in the 50's and 60's.
jim hanson
March 22, 2020
Bob Karr was one of the good people that we are fortunate enough to have in our lives and I will miss him terribly. To his family and particularly his wife Judy - I am so sorry for your sorrow.
Suzanne Kelly
Friend
March 21, 2020
Showing 1 - 5 of 5 results