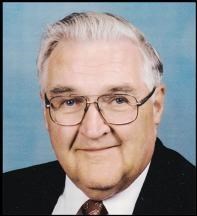 Bob was born in Seattle, Washington (Ballard) on May 1,

1923 to Jon and Gudrun Magnusson

and died on November 28, 2015 (the day after watching his beloved Huskies win the Apple Cup). He was predeceased by his wife of 52 years, Dorothy, in 1998, wife Margaret in 2004, and wife Beverly in 2013, daughter Marie in 1961, and sisters Sigga Spurlock and Anna Hodgson. Bob is survived by his son, Jon Magnusson (Nancy), sister Florence Reep, three grandchildren, and three great grandchildren. He is also survived by two step-sons, three step-daughters, twelve step-grandchildren, and many loving nieces and nephews.

After graduating from Ballard High School in 1940, Bob enrolled at the University of Washington in engineering. His time in college was interrupted by three years of military service during World War II. Following graduation from Officers Candidate School at Fort Belvoir, VA, he served in the European Theater in England, France, and Germany in an engineer combat battalion.

After the war Bob reentered the UW and graduated with a BS in Civil Engineering in June, 1947. While at the UW he was a member of Alpha Sigma Phi Fraternity and was on Washington's swim team.

After graduation Bob joined the Bethlehem Steel Corporation and after a short time he left to become one of the first employees of the John H. Sellen Construction Company. After forty years of helping to build a very respected and successful company, he retired as Vice Chairman of the Board.

Bob enjoyed life but never more than when attending gatherings of family and friends. He was so proud of his entire family and treasured his relationship with several long-time friends. For each member of the family, he was a great role model of unconditional love and always doing the right thing.

A memorial service will be held at 2:00pm on Thursday, December 10th at Bethel Lutheran Church, 17418 8th Ave NE, Shoreline.

In lieu of flowers, the family requests donations be made to "The Dorothy A. Magnusson Endowment" for uncompensated care at Seattle Children's Hospital and Research Foundation,