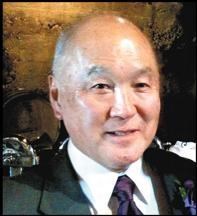 Shuzo Takeuchi passed away peacefully at home on 12/23/2019 after an ongoing struggle with idiopathic pulmonary fibrosis. Shuzo was born in Seattle, WA in 1937, graduated from Garfield High School and earned his Undergraduate and Master's degrees from the University of Washington. It was growing up in Seattle that he first met his beloved future wife, Alice. They were married for 51 years.

Shuzo spent 30+ years in education, initially starting in the Seattle public schools before moving to the Bellevue public schools, where he worked for the majority of his career. Shuzo primarily worked at Chinook Middle School, Highland Middle School and Sammamish High School in Principal and Vice Principal roles.

Shuzo and his family were long time Bellevue residents and had lived on Somerset for over 30 years. Shuzo and Alice were avid travelers visiting dozens of countries in the years after his retirement. They often traveled with Alice's sisters, May, Helen and Joice, in addition to visiting their sons and their grandchildren in California and New York. Shuzo was also a devoted golfer and particularly enjoyed golfing with his Monday Golf group around the various King County golf courses.

Shuzo is survived by his two sons, Steven and Greg, four grandchildren, Cassidy, Natalia, Ava and Callie and his sister Mary.

In lieu of flowers donations can be made to Evergreen Hospice Care or the Seattle Cancer Care Alliance organizations in honor of Shuzo.
Published by The Seattle Times on Jan. 12, 2020.
To plant trees in memory, please visit the Sympathy Store.
MEMORIAL EVENTS
To offer your sympathy during this difficult time, you can now have memorial trees planted in a National Forest in memory of your loved one.
MAKE A DONATION
MEMORIES & CONDOLENCES
Sponsored by The Family.
0 Entries
Be the first to post a memory or condolences.