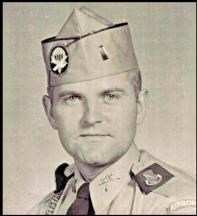 Tom was born June 24, 1928 in Auburn WA to Thomas O'Neil Sr. and Carolyn Mescher O'Neil. During his Auburn high school years he was active in three sports and received five letters. He sang in the chorus and boys' quartet, acted in theatrical productions, and graduated in 1947. He was granted a basketball scholarship to Gonzaga University, and while there he received a BA degree in Economics, was designated a distinguished military graduate and commissioned an Army Second Lieutenant. Tom requested immediate active duty and was assigned to the infantry school at Fort Benning GA where he received training as a paratrooper and heavy drop officer. Following training he was assigned platoon leader with the elite 82nd Airborne Division at Fort Bragg NC and he received jungle training in Panama. After two years active duty as Company Executive Officer and Company Commander, Tom returned to Auburn and was accepted to the Executive Training Program with the American Automotive Insurance Company in St. Louis MO. He spent the next 34 years in various insurance sales and management positions in St. Louis MO, San Jose CA and Seattle WA, and the last 18 years with the Great American Insurance Company in sales and underwriting of large complex commercial accounts. He was active in industry committees and associations and served for a year as president of the Washington Insurance Underwriters Association. He was a member of the Presidents Council at Gonzaga University for 25 years and a loyal "ZAG" fan forever. With his close friend Helen Ziebell he worked for many years tracing his ancestors back to Ireland and Germany.

After his retirement in 1988 he cruised, traveled and engaged in all family activities. The most important part of Tom's life was always family. He will be greatly missed by all who loved him. Tom is survived by his nephews Dave (Anne) and Larry (Lori) O'Neil, nieces Joan (Randy) Cox, Janet (George) Josten and many great and great-great nieces and nephews. Services were held on August 6, 2020 at Sumner Cemetery where he will be laid to rest. In lieu of flowers please consider making a donation to the Gonzaga University Student Scholarship Fund, the Heart Fund or any charity of your choice.
Published by The Seattle Times on Aug. 16, 2020.
To plant trees in memory, please visit the Sympathy Store.
MEMORIAL EVENTS
To offer your sympathy during this difficult time, you can now have memorial trees planted in a National Forest in memory of your loved one.
MAKE A DONATION
Please consider a donation as requested by the family.
MEMORIES & CONDOLENCES
Sponsored by The Family.
0 Entries
Be the first to post a memory or condolences.