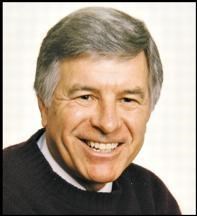 In the presence of his loving wife and family members, Walt Edmiston died peacefully on July 20, 2018, following complications from surgery and a fight against cancer that stretched across four decades.

Walt is survived by Ina, his wife of 65 years, his children Laurie (Glenn) Griffin, Steve (Melody) Edmiston, and John (Becky) Edmiston; his grandchildren Taylor, Paige, Madison, Jazmine, and Xander; and his sister Elinor. He was pre-deceased by his parents John C. and Hazel Edmiston, his brother Allen, and baby daughter Peggy.

Born on May 24, 1933, he grew up in Marshall, Washington. His mother was a teacher so education was paramount. School suited Walt - he skipped two grades and graduated from Cheney High School at 16. Being younger than his peers, he struggled to compete in sports. But, he persisted as an athlete and baseball became a passion. He graduated from Eastern Washington College of Education and met Ina while student teaching. They married in August, 1953.

He was drafted within the year, and was selected for Army Security Agency School where he learned Morse code. His tour of duty in Korea with the 330th Communications Reconnaissance Company became inspiration for one of his greatest gifts - story telling.

Walt began his teaching career in the Highline School District. He taught history and economics at Tyee H.S. from the time it opened until his retirement in 1989. Along the way, he earned a Master's Degree in Education, coached baseball, refereed basketball, taught drivers' ed, and, when Tyee launched girls' basketball, he coached the team. It was through his teaching and coaching that his ability to inspire others was perfected.

Walt loved to travel. Summers meant family road-trips and camping - including frequent visits to relatives and to a family cabin on Lake Cocolalla. Walt and Ina chaperoned study abroad programs and hosted foreign students in their home. That's how the family grew to include our beloved German exchange students Silke and Dagmar and their families.

On the day he retired, Walt was discovered on a golf course by a talent scout and began modeling -

including posing for cruise brochures on multiple occasions. Free cruises were part of his compensation, so Walt and Ina took full advantage - traveling to ports of call all over the globe.

Walt's finest role may have been the resiliency and grace with which he battled cancers. The latter half of his life was impacted by this disease but it never defined him. His dignity and love of family were never hostage to his struggle.

for six decades and, as our patriarch, he routinely led us in family prayer. We believe he left his ravaged body for a better place. But, we miss him so.

at 1:00 p.m. at Southminster Presbyterian Church

Memorial gifts may be made to the Des Moines Food Bank, Seattle Cancer Care Alliance, or Southminster Presbyterian Church.

So sorry to hear of his passing. He was a great and talented baseball coach at Tyee. I often thought of him as the Perry Mason of the baseball diamond, so conversant was he with the baseball rules and their applications. I saw some pretty fancy baseball lawyering during our games. He always kept a cool head and processed things so logically. He was impressive. He will be missed. Greg Miller, Class of 1971
Gregory Miller
March 25, 2019
Walter walked into the Des Moines Activity Center one day not nearly enough years ago to learn to play bridge. How grateful that he did! It meant many happy afternoons in the company of a bright and gentle man who was still broadening his horizons and learning new things in his sunset years. I speak for our other bridge buddies when saying that he will always be in our hearts and that he is greatly missed.
SueAnn Gilmore
Friend
August 24, 2018
Pauline Van Der Meer
August 10, 2018
Pauline Van Der Meer
August 10, 2018
They say you should put life into your days, instead of days into your life. Mr Edmiston put a lot of life into his days! His was a life well lived! He was one of my favorite teachers at Tyee. May he rest in peace.
Lynn A.
August 9, 2018
One of my favorite Teachers. Rest in Peace.
Nichol Phillips
August 8, 2018
We had a lot of good times, Ina, but good times simply don't last long enough. When your grief subsides a little, and you will have some, I've been down that road, your good times will start blooming. Believe me!
Jerry
Friend
August 7, 2018
A very long time ago, during one of my teacher education classes, I remember being asked who my favorite teacher was and why. My answer: Mr. Edmiston. He had high standards and yet was fair. (And yes, there were the stories.) I had Mr. Edmiston for both history and driver's ed and to this day appreciate the lessons he taught me and the impact they have had in my life. Bon voyage, dear teacher.

Phyllis Carlton, Tyee class of 1974
Phyllis Carlton
Student
August 6, 2018
Mr. Edmiston was a favorite teacher of mine at Tyee. Condolences to his family and many friends.
Craig Edmonds
August 6, 2018
I adored Mr. Edmiston. He was smart and kind and treated his students with great respect. I'm a better person for having known him. It's lovely to read in his obituary that he was a wonderful man 24/7 and that he had a long, happy, and meaningful life. Sending my condolences to his family.

Ann Essko, Tyee High School Class of 1973
Ann Essko
August 6, 2018
As a teacher committed to excellence in instruction, Mr. Edmiston conveyed more than information to his students. Behind every lesson or interaction, a higher message came through: the value of character and integrity. He was a profound influence in my life.
A high school teacher meets with 150 students every day. Coaching after school, teaching drivers'ed., etc., takes an enormous toll on one's energy and family time. Thank you, Edmiston family, for sharing your husband, dad and grandfather with us!
Nancy (Van Wyck) Baron
Friend
August 5, 2018
Walt was a wonderful friend and coaching associate in the Highline district at Tyee High School. A true Brother in Christ.
Lee Ayers
August 5, 2018
It's no wonder Walt was discovered by a talent agent for modeling.......even in the early 70's when I had him for History it behooved me to look forward and pay attention because not only did he have a great way of holding ones attention for class, but he was incredibly easy on the eyes I was also lucky enough to have him as my driving instructor in that crazy simulator. Bottom line, heaven is getting a real jewel.....he was a terrific individual in everything he did.....my heart breaks for the family as I'm sure you will miss him desperately.....Jodi Wichmann.....class of '75
Jodi wichmann
August 5, 2018
Showing 1 - 13 of 13 results