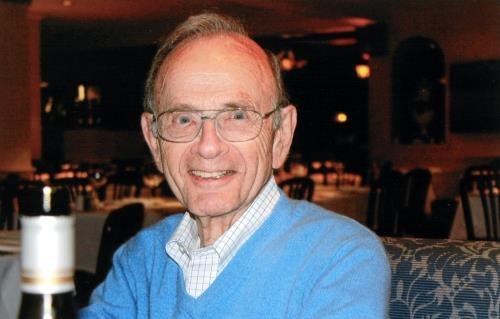 BORN
1933
DIED
2021
FUNERAL HOME
Sinai Memorial Chapel Chevra Kadisha
1501 Divisadero Street
San Francisco, CA
Alan Sol Smith
June 30, 1933 - June 14, 2021
Alan Sol Smith, beloved husband, father and grandfather, died peacefully at home surrounded by family, at the age of 87.
Alan was President and co-owner of the Crown Market, a kosher supermarket with stores in West Hartford, New Haven and Springfield, MA. The West Hartford store remains an institution in that community and continues to draw customers from around New England, 81 years after the Crown was co-founded by Alan's father Sam Smith.
Alan married his high school sweetheart, Paula (North) on August 16, 1953, and they have shared a long, loving adventure and nearly 68 years of marriage. Together they raised three children, Steven, Joshua and Tovia, who will remember him for the way he offered unwavering support and grounding, while at the same time, encouraging them to chase their dreams, wherever that may lead. He delighted in watching his children marry, and loved Darci, Lael and Michael as his own, and he adored his grandchildren Jaron, Talia, Arianna, Drew, Sophie Ana, Laina and Jonathan.
After graduating from the University of Pennsylvania Beta Gamma Sigma, with a Bachelor of Science degree in Economics in 1954, Alan went on to become a CPA. He practiced for several years, before taking over the family business, and running the Crown Market for a quarter century. Alan was dedicated to his volunteer work in the Hartford Jewish community, serving on several boards including the Jewish Federation, the Jewish Community Center and the Hebrew Academy of Greater Hartford, (aka New England Jewish Academy) leading the school's move from Hartford to a state-of-the-art campus in Bloomfield, CT. He was known for his integrity, his passionate commitment to the community and his philanthropy.
Alan first grew to love San Francisco when he was stationed to serve in the US Army at the Presidio in 1954 for two years. After retiring at age 55, he and Paula first enjoyed retirement on the East coast until 1998, when they made the move back to the Bay Area.
Alan is survived by his wife, Paula, their thee children and seven grandchildren.
Donations can be made to the New England Jewish Academy, 300 Bloomfield Avenue, West Hartford, CT 06117, and/or Rhoda Goldman Plaza (aka Scott Street Senior Housing Complex), 2180 Post Street, San Francisco, CA 94115.

Published by San Francisco Chronicle from Jun. 23 to Jun. 27, 2021.
To plant trees in memory, please visit the Sympathy Store.
MEMORIAL EVENTS
To offer your sympathy during this difficult time, you can now have memorial trees planted in a National Forest in memory of your loved one.
Funeral services provided by:
Sinai Memorial Chapel Chevra Kadisha
MAKE A DONATION
MEMORIES & CONDOLENCES
Sponsored by Sinai Memorial Chapel Chevra Kadisha.
4 Entries
Our condolences to the Smith family. Alan was not only a friend and a good person, he was a good manager even as a teenager, when he managed our high school tennis team. May the memory of him be a blessing to you.
Rickie and Alan Whitman, Westlake Vlg, CA
School
July 4, 2021
Our deepest sympathy to you, Paula, and to all of Alan´s dear ones.
Arlene and Dan Neiditz
Friend
July 2, 2021
He was a kind, thoughtful man. I worked for him at Crown. He was so proud of his wife and spoke highly of his children. His love for his family was evident. I´m sorry for your loss and deeply grateful that I had the opportunity to know him.
Diane Hillyer
June 27, 2021
The world has lost a wonderful man who was kind to all...most memorably for me, to my late father. May his memory be blessed. Condolences to his talented wife Paula and the rest of the Smith family.
Rachel D Lindenthal
June 27, 2021
Showing 1 - 4 of 4 results