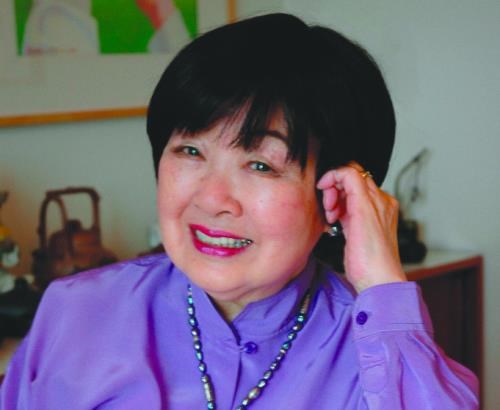 BORN
1922
DIED
2020
Alice LoweAlice Lowe, the CEO and driving force behind Howard Gossage's advertising agency, and a major player in the establishment and development of San Francisco's Asian Art Museum has died aged 97.

Alice Lowe was born in Portland Oregon on November 4th, 1922, the youngest of four children. Her father, an immigrant from China, died when Alice was three-and-a-half years-of-age. Thereafter, Alice was brought up by her American-Chinese mother, who applied her great skills as a seamstress to raising four children through the depths of the Great Depression.

Alice, who attended an American school in the morning and early afternoon, and a Chinese school in the evenings, was encouraged to integrate with the Western mainstream. Upon graduating, the norm was for a Chinese girl to marry into her ethnic community. But Alice worked a couple of years instead, then enrolled at Portland's Reed College and thereafter paid her way through her three years as an English Literature major.

Alice was attracted by Reed's formidable reputation for intellectual rigor, and she reveled in the open enquiry and debate that the College encouraged in its students. She did not, however, have any vocation in mind and, upon graduating, asked her fellow English majors "Okay, now where shall we go? What breadline should we stand in?"

Instead she headed for San Francisco and arrived at the YMCA in Chinatown in 1949. In those days, Chinatown was a closed enclave within the city, and its inhabitants rarely ventured beyond its confines. But Alice never felt aware of any racial differences and said she "never has a chip on her shoulder" about her origins. To help the community, she joined the Square and Circle Club, which is currently the oldest Chinese/Asian women's service organization in the US, eventually serving as President for several terms.

While leading the production of a Square and Circle Club fund raising event she coaxed a young designer and artist Lewis Lowe to volunteer his time to help with the graphic aspects for the event. This eventually lead to a 50+ year marriage and collaboration together assisting in the production many galas and events for non profit and service organizations too numerous to list.

By 1953, she was working as assistant to the PR director at the advertising agency, J.J. Wiener and Associates. It was then that she met Howard Gossage. At the time he was a struggling copywriter who'd come to the agency for a job interview. Joe Weiner had been impressed but did not need another writer. When Alice left work that day, she encountered a forlorn Gossage and accompanied him down Montgomery Street trying to lift his spirits. She later said, "He didn't know exactly what he wanted to do. He knew he was very bright in a general sort of a way, but how do you apply that to everyday life."

By 1957, Gossage had found his raison d'etre, returning to Joe Weiner's agency as a Partner.

For the next fifteen years Gossage produced some of the most innovative, influential and irreverent advertising ever. He invented an interactive style that led Jeff Goodby of Goodby Silverstein & Partners to say, "The best of Gossage is the best advertising ever done, and what's really amazing is that the work he did foretold what's happening on the internet and social media right now."

Orchestrating all this revolutionary activity was Alice Lowe. As she explained in her own matter of fact words: "My role was that of the modern day CEO - which means in charge of everything: parties, running business, finance, hiring, firing, hitting deadlines, media buying, everything you can think of … except for art direction and copy."

She was also the adman's confidante. Gossage was brilliant, but he was difficult. Prone to depression, he would stay away from work for days on end. The only person who could coax him back to his desk was Alice Lowe. She understood the pressures he was under and how the artistic temperament responds to those pressures. But it was tough love that she dispensed. Especially when it came to judging his work. "Tell it like it is, Big Al" he'd say, and Alice would oblige, warts and all.

Much to Alice's consternation, Gossage often gave her only a few hours' notice. Under such pressures she invented "The Instant Party Plan" which enabled her to transform a working office into a bar, buffet, restaurant and dance floor within 15 minutes.

She was the driving force behind the agency. Jerry Mander, who joined as a Partner in the early 1960s says she was "a remarkable up-beat energetic brilliant person ... she played a great part in my life----in the agency days---a true brilliant wonder of efficiency, collaborativeness, competence, creativity, cheerfulness, and kindness."

All this was duly acknowledged when Alice was made President of the business. At a time when adland was a male preserve, having a female running the show was highly unusual. The fact that this woman was of an Asian ethnic background made Alice's achievement even more remarkable.

Somehow, while running Howard Gossage and his agency, Alice found time for an extracurricular activity which was to become the focal point of her life after she left advertising when Gossage died in 1969.

Alice had always been fascinated by her Chinese heritage, and when she saw an advertisement recruiting Docents for San Francisco's Brundage Collection of Asian art she asked Gossage if she could have time out each week to study.

As she explained, "Howard let me do what I wanted, and said 'you shall be my contribution to culture'."

With that, in 1966, Alice became one of the first Docents at what was to be the Asian Art Museum. Thereafter she also used her professional experience to transform the collection's PR and fundraising.

One of her key initiatives was to use the museum as the venue for the fund raising events upon which the institution survived. This met with much resistance, but Alice got her way. She then transformed these events by organizing the spectacular "Marco Polo Ball." As she explained: "We had a select group of [influential] candidates that we chose, and they were to sell raffle tickets. The one who sold the most raffle tickets would get to be Marco Polo" - and be the focal point of an extravaganza which ultimately brought in $100,000. As Alice said, "a lot of money in those days".

After that, the Museum became synonymous with sensational balls, galas and other creative commercial events..

She brought the same maverick approach to raising the Museum's public profile. With Alice in charge of PR, close working relations were established with the San Francisco Chronicle and other mainstream media outlets.

As Chair of the Committee on Communities, Alice also worked hard to involve the Bay Area's Asian and other communities who had, up until then, felt ignored by the Museum's leaders. As she said, "I feel blessed, in a way … they told me how they really felt, so that I could do something about it."

"Doing something about it" was Alice's forte. And this urge to change and make things better led to her being appointed by then Mayor Dianne Feinstein to serve as a Commissioner on the San Francisco Asian Art Commission from 1985 to 1999. Alice later served as the first Asian American Chair of the Commission from 1989 to 1993.

Alice was also President of the Society for Asian Art from 1986 to 1988. It was during her tenure that the city of San Francisco offered the downtown library to the Museum with the provision that a bond measure be successfully passed to renovate and upgrade the facility suitable for the collection.

Alice made sure that this provision was met, and the Museum moved to its new home in 2003

Despite the prestige and pressures that came with these positions, Alice continued to work every week as an Asian Art Museum Docent.


In fact she did so for more than 50 years. Even as her health was failing, she would study the background of new exhibits so that she could maintain the high standards which she had set as one of the first Docents, a half century earlier.

Alice still visited the Museum after moving out of her home in San Francisco's Sunset district into the Peninsula Del Rey Retirement Community in Daly City. Her rooms there were decorated with replicas of some of her favorite pieces from the Museum, and with paintings by her late husband, the artist Lewis Lowe.

She died on Monday, 2nd March having fought illness with great dignity and tenacity for several years.

Alice Lowe: Born November 4, 1922, Died March 2, 2020. She was predeceased by her husband Lewis Lowe. They had no children. Donations in Alice's memory may be made to the Asian Art Museum.
Published by San Francisco Chronicle from Mar. 10 to Mar. 15, 2020.
To plant trees in memory, please visit the Sympathy Store.
MEMORIAL EVENTS
To offer your sympathy during this difficult time, you can now have memorial trees planted in a National Forest in memory of your loved one.
MAKE A DONATION
MEMORIES & CONDOLENCES
3 Entries
PS And Alice would have been appalled at my spelling of formiddable!
Sorry, Big Al
Steve Harrison
Steve Harrison
March 20, 2020
Alice was a force of nature. And certainly was the great woman behind the great adman Howard Gossage. I could not have written my biography of Gossage without Alice's encouragement and insights. So she was the driving force behind me, too! Aside from being a formiddable intellect, she was also very funny and I will miss her greatly. God bless her.
March 19, 2020
Steve Harrison
March 19, 2020
Showing 1 - 3 of 3 results