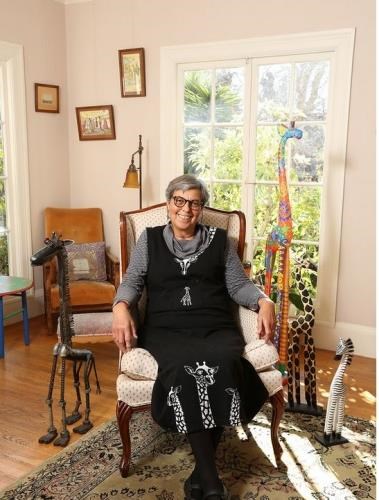 Andrea Saltzman died peacefully in her home early Tuesday morning, just over four years after her diagnosis with stage IV lung cancer. She was an accomplished lawyer, life-long social activist, and enthusiastic collector of all things giraffe. She is survived by her brother Selig Saltzman (Nancy), nieces Lisa and Allison Saltzman, husband Rick Marcus, and daughter Ruth Marcus.

Originally from Brookline, MA, Andrea graduated with honors from Bryn Mawr College in 1967. She promptly moved to Berkeley where she entered the University of California first as a graduate student in Sociology and then entered law school, graduating with honors in 1972. After clerking for the Supreme Court of California, she spent several years as a public defender in Monterey County where she often had to clear migrating butterflies from her green car before heading into work. She later worked for Legal Services in the Bay Area, taught at the University of Illinois, University of Michigan, and UC Berkeley. She was President of the Champaign County ACLU and was elected to the Illinois Citizens' Utility Board for her congressional district. In 1989, Andrea began a long career in municipal law, earning Appellate Specialist Status the first time it was offered by the Bar. During this time, she produced three editions of her book "Law in Social Work Practice" and numerous articles in scholarly journals.

Andrea was a force of nature with an infectious smile and a story for every occasion. She loved telling jokes, playing scrabble, and reading voraciously for various book groups and pleasure. She was also a tireless volunteer for such organizations as the Women's Cancer Research Center, Junior Center of Arts and Sciences, and the Women's Board for the Oakland Museum White Elephant Sale. She demanded the best of everyone, especially herself, often spending days on end perfecting briefs. Without seeking leadership roles, she earned them through her character and natural presence. And when she was diagnosed with cancer, she intervened in a case to support of the California End of Life Options Act because she fervently believed in each individual's right to make such choices for herself. She was quoted in a court of appeal opinion in that case; it gave her great pleasure to know that her legacy is one of helping preserve the right to choose.

And the giraffes! Andrea began collecting giraffes when her daughter was young because she knew that any offspring of those parents would be tall. She wanted her daughter to know that tall is beautiful. Over the years, the collection expanded until it passed 800 giraffe items, including an 8 foot tall Steiff bought on Craigslist for $50. In 2017, she cemented her commitment to giraffes by dedicating a bench opposite their enclosure at her beloved Oakland Zoo. The inscription on the plaque reads: "A Zoo Haiku: Andrea Saltzman/ Collects giraffes of all kinds/ Now she has a bench." If you would like to donate in her memory, please do so to the Oakland Zoo.
Published by San Francisco Chronicle from Aug. 14 to Aug. 15, 2019.
To plant trees in memory, please visit the Sympathy Store.
MEMORIAL EVENTS
To offer your sympathy during this difficult time, you can now have memorial trees planted in a National Forest in memory of your loved one.
MAKE A DONATION
MEMORIES & CONDOLENCES
14 Entries
I sit on Andrea´s bench at the zoo, look at the giraffes, and honor her wit, spirit, generosity, and integrity. And giraffes and all the tall people in my life.
Betty Henry
Friend
August 8, 2021
I was fortunate to have known both Andrea and her future husband Rick when we were all law students together at Boalt Hall. I fondly remember Andrea as a brilliant woman with a great sense of humor and commitment to social justice. My sincere condolences to Rick.
Mark Shenfield
April 28, 2020
Andrea was part of a group of high achievers I managed to infiltrate in the late 1960s. Over the years, when we'd periodically run into each other around town or at social events. it was always a delight. Her smile, sense of humor and magnanimous spirit never failed to brighten my day.
I just heard of Andrea's passing yesterday and searching for our recent connections through my saved emails reminded me of her attendance at my 70th birthday and my attendance at hers in 2016. And, not that I needed evidence of Andrea's giving nature, it popped up in of all places in a 2017 Next Door email I somehow had kept. The email included a post by a woman asking for help in finding a drawing/art mentor for her 10-year old daughter. Right below, there was Andrea quickly responding with a couple of recommendations.
My condolences to Rick and Ruth.
Marty Schiffenbauer
September 8, 2019
Impossible to believe we will no longer see Andrea at Bryn Mawr book club meetings! What an amazing woman; I didn't know the half of it. Condolences to the family.
Ilona Bray
Friend
August 21, 2019
Andrea was a great friend and mentor. We had such fun at the League, book club and other adventures. And the giraffe gathering and transporting! I miss her. Virtual hugs to Rick and Ruth.
Heather Mclaughlin
August 19, 2019
Andrea was indeed a force of nature and also a most generous, kind, and intelligent person. Despite all her health challenges, she was always a positive presence, with a smile, interest in others, and something of value to share. She was inspirational in her ability to share her medical progress without ever wallowingas steps in a journey rather than as a military battle.

She loved travel and gave excellent recommendations for places to visit. Just a very few months ago, I asked her if there was any place she still wanted to visit. I can't remember where she mentioned, but I laughed when she said she was unlikely to go there because she didn't know of a conference there. Always practical...

I shall miss her.
Betty Henry
August 15, 2019
I've known Andrea for 36 years starting from when I babysat Ruth as an infant. She was one of a kind and I was very sorry to hear that she passed away. Ruth and Rick, I hope you're doing okay.
Katie Sardinas
Friend
August 14, 2019
I have great memories working on appellate projects with Andrea at my old firm, Meyers Nave. She was diligent, smart, opinionated and did not hesitate to speak her mind. RIP Andrea and much love to the family.
Art Hartinger
August 14, 2019
Andrea was brilliant, loving, committed to social justice and a great raconteur. Her warmth, impish sense of humor and curiosity about everything attracted many good friends from all walks of life. Her enormous energy was also a magnet. A life well lived - she left the world a better place. We'll all miss her.
Peter Hecker
August 14, 2019
Andrea is, was, and always will be a great lady. Her incredible intelligence and personal warmth will last forever and will comfort all who got to be around her. While she will be missed, she will always be with all of us.
Ben Shafton
August 14, 2019
I am truly sorry for your mother's transitioning. I pray her beautiful, new presence will soon be made known to you.

Continue to love her now that she is in Land of the Ancestors.

Our hearts are with you. We will be writing to you soon.

Jeanne and Dave
August 14, 2019
What a beautiful obituary. I remember the first time I got to know Andrea, when I was a shy 9 year old on a field trip in the Marin Headlands and she took me under her wing. She then, as always, greeted me with her big smile and made me feel safe. She was easy to talk to, kind, open, and generous; qualities that persisted throughout the time I knew her. I always admired how Andrea pursued her eclectic interests with gusto (just like her daughter), from giraffes to estate sales and Scrabble. I also noticed how she was always so proud of Ruth and all her adventures. I will miss Andrea and I have and will continue to think of her fondly as I sit on her bench at the zoo.
Tamara Henry
August 14, 2019
Andrea was one of the very early members of the East Bay Mystery Readers' Group having joined in July 1995. As well as appreciating her insight on the books we'd read, we loved watching her embroider one of her beloved giraffes into various items of clothing, and to hear updates about Ruth, the daughter of whom she was so very proud. Rest in Peace, dear Andrea. We shall always remember you with love.
LJ Roberts
August 14, 2019
Showing 1 - 14 of 14 results