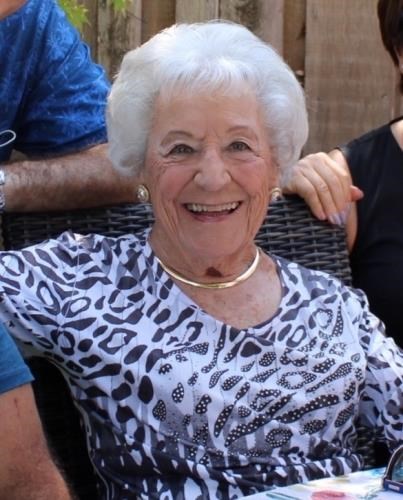 BORN
1924
DIED
2021
FUNERAL HOME
Duggan's Serra Mortuary
500 Westlake Avenue
Daly City, CA
Anita Vannucci Boragno
Sept 1, 1924 - December 2, 2021
Anita Boragno peacefully passed away on December 2, 2021, in her home of over 55 years. Anita was born in San Francisco on September 1st, 1924 to Alfredo and Lida Vannucci. She was a proud San Francisco native with strong, loving ties to the Italian-American community. Anita was raised in North Beach with her younger sisters, Lilia Battaglia (deceased) and Eleanor Belluomini (deceased), and attended Presentation High School, where she made many lifelong friends. In 1944, she married the love of her life, Raymond J. Boragno, who proceeded her in death. Their 49 years of marriage were filled with love and laughter and centered around family. They had 3 daughters and 9 grandchildren: Diane Handlos (Michael-deceased), Bryan, Lynne, Bridgette (Paul), Adam (Lyndsay); Linda Boragno-Dopp, Stephanie (Chad), Christina (Charles); Carol Callaghan (Dennis), Danielle (Kristin), Jeffrey (Amanda), Gregory. In recent years, Anita would proudly announce to anyone she met that she had 7 great-grandchildren, who brought great joy to her life.

Anita and Raymond shared a love for travel. They frequented Sonoma and Lake Tahoe, and once commercial travel became a reality, they began jet-setting to Hawaii, Europe, and parts of Asia, whenever possible. Anita prided herself on being fluent in Italian and was often mistaken for a local during her trips to Italy.

Anita was the proud matriarch of her large, extended family, which included her nieces and nephews: Jean Borella (Bob), Joyce Guglielmi (Bob), Alan Belluomini (Lorna – deceased), John Belluomini (Nancy), LeeAnn Boragno, David Boragno, and the late Christopher Boragno; and frequent travel companions, Joan and Art Costamagna. She had a firecracker personality and loved all parties, family gatherings, the Giants, and the Arts, regularly visiting the opera, theater, and symphony. Anita was an avid shopper and loved a good martini. She was a member of the DePaul Seniors Group, participated in Boys and Girls Salesian Club fundraisers, and was recognized for her efforts by the Children of Mary Society. Anita routinely reflected on the beautiful life she lived and was grateful at the end of each and every day for the "great day" she had experienced. Her love for life and unlimited energy will inspire all of us. She will remain in our hearts forever.
In lieu of flowers, please send donations in memory of Anita Boragno to: Salesian Boys and Girls Club; Children of Mary Society; Glide Memorial Church

The Celebration of Life will be held on Thursday, December 9th at 10:30am at Sts. Peter and Paul Church, 666 Filbert St., San Francisco.

Published by San Francisco Chronicle from Dec. 3 to Dec. 5, 2021.
To plant trees in memory, please visit the Sympathy Store.
MEMORIAL EVENTS
Dec
9
Celebration of Life
10:30a.m.
Sts. Peter and Paul Church
666 Filbert St, San Francisco, CA
Funeral services provided by:
Duggan's Serra Mortuary
MAKE A DONATION
MEMORIES & CONDOLENCES
Sponsored by Duggan's Serra Mortuary.
8 Entries
my heart felt condolences
salvatore martinelli
December 19, 2021
In loving memory of a wonderful person. We will love you and miss you always.
Alessandra Purcina
December 7, 2021
My deepest sympathy to Diane.Linda,Carol and their whole families. Peace & love Priscila M. Ugalino
[email protected]
December 7, 2021
What a gift was bestowed on us when Anita decided to join the many activities at St. Cecilia Parish. I met Anita 12 years ago, and had the priviledge of playing Bridge with her. She brought such joy and laughter to our group. She was fun to be around, and I will always remember her giving and love of life spirit. She always spoke of the love she had for her family, and in many ways we felt part of her family
Marion Bellan
December 6, 2021
Our greatest & deepest sympathy to Diane,Carol, Linda & their whole families. I will miss your mom. She is such a very nice lady or women. I will pray for her soul. May her soul Rest In Peace. Love & Prayer, Priscila M. Ugalino
Priscila Ugalino
December 5, 2021
Anita will be sorely missed by all her friends at the Collins Center. She spent time with us every week playing Bridge and BINGO, lifting us all up with her joyful outlook on life, her upbeat energy, her confident personality, fashionable style, easy smile, and willingness to be a true upstanding friend. We are forever grateful that she was a big part of our "family" too. May God bless her and all of her family. Peace and love to you all from her friends at the Collins Center.
St. Cecilia Parish Collins Center
Friend
December 5, 2021
Dear Diane and family, So sorry to hear of your mom´s passing. That generation was so full of life. My mom and dad were members of the DePaul Seniors also. Pat Sartorio Chelini
Pat (Sartorio) Chelini
December 4, 2021
Dear Diane I am so sorry to read of your Mom´s passing. I always enjoyed talking with her she was so much fun. My thoughts and prayers are with you and your family.
Sharon Ghilardi-Udovich and family
December 3, 2021
Showing 1 - 8 of 8 results